These are two categories of bad experiences at the hands of makers. They exist in the digital world and in the meat world. They don’t normally overlap because there is a steep gradient of competence between them. Idiots screw things up by accident and assholes screw them up on purpose.

Idiot design in digital form might lead to failed interactivity on a website through a navigation bar where the background and the links are the same color. Idiot design in the walk-around world can be seen in the work of a bad carpenter who installs a door so it cannot be opened without banging into the toilet and forcing you to squeeze around it to enter. These are the idiots, confidently creating a world of uneven stairs, non-functioning appliances, and unreadable documents. I have a few humble examples.

Asshole designers don’t make these mistakes, at least not by accident. They are slick by trade and their competence is what makes it possible for them to fuck around with us. Individually they might be decent people though I rather doubt it. The force driving asshole design is, of course, money, but the rationale for asshole design is of course, also money. Asshole designers can accurately time and place a button you do not want to tap on your phone exactly where and when you next tap. Asshole design places awkward, unskippable and immobilizing video ads in your way you until they choose to release you. These two examples remind me of high school jerks, the first sliding your lunch under your butt as you sit down to eat, the second like a big jock stopping you in the hallway, and blocking your advance until the entertainment value is used up. Asshole designers are not only on the web, you can see their work in any urban setting where low ledges are spiked to prevent sitting and park benches are bisected with metal to prevent sleep. Our most common encounter with asshole design is in product packaging designed to lie. These assholes fool consumers in a way so premeditated and calculating that it is an obvious con. The classic gimmick is pretending that there is more product included than there really is. The amount of planning evident in such packaging removes any doubt of intent.

There are two final messed up design varieties. They nearly overlap, but they exist for totally different reasons.

TDPMTT Design or They Don’t Pay Me To Think.
It’s close to idiot design in effect but lacks the sincerity and incompetence. It requires a hierarchy and several players. You see it wherever a really bad idea has been completed competently but with utter indifference to how pointless and stupid it is. This category is a mix of absurdist art and the passive aggressive person who follows your instructions literally in order to annoy you. It begins with a bad set of work orders that contain an undetected error sent from somewhere higher up the org chart. In step 2  a slack-jawed human-robot stares into the void of those stupid plans and sets to work. The result is that exterior door on the third floor of the building or the staircase with no outlet. Eventually, a foreman inspects the work and yells “What the hell (fuck) is this? ” The robot worker acknowledges the idiocy with a  shrug “Hey, I just do what they tell me. They don’t pay me to think.” The ritual is finished when the foreman decides it’s too much trouble to change the thing. Dreamed up by Negligence, Made real by Indifference, and Confirmed by Apathy, The work is done. 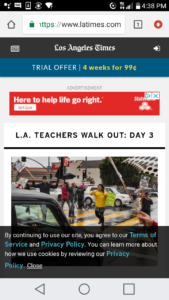 Perfectly adapted to life in Shitsville
In the last category, it is the state of the art itself that is wrong and not the designer. Here the foundation is that the world has collapsed in disorder (metaphorically speaking) into an Ayn Randian hellscape. Good design must embrace terrible design, becoming one with it. My example is website design for phones. This isn’t about the design being ugly or incompetent. It is about user experience, which the designers fully expect to be hellish. The designers are working to uphold the standard of making the shitty experience of our visitors no shitier than every other shitty experience they have while browsing on the phone.  At best, websites smooshed to phone size are harder to navigate, partly as a size issue of teeny buttons and fat fingers and partly because the navigation itself has adapted in confusing and frustrating ways. There is no room for the understandable navigation that appears in the full-size version. Its navigation or content and content wins. Sort of. Moments after you arrive, creatures of the void sense your presence and crawl, wiggle and hop in your direction.  All seems quiet and peaceful, the content lies open before you, accessible. Then it all seems to happen at once, the screen fills with sales and personal data parasites. Little ad hoodlums, “Where do you think you’re going now?”,”Oh, he’s here to read an article, isn’t that nice… well you’ve got business with us first, Sunny Jim”. Phone websites that are set up this way, which is to say, all of them, are like shopkeepers with clean, wholesome wares who maintain out front a gang of nosy, handsy jerks with no respect for personal space or the end of a conversation. This is baseline UX on the phone web: swatting flies, agreeing to vague things and waiting for stuff to happen. This is like being stopped 7 times while walking down your hallway to do small favors for strangers. Unavoidably Irksome is the principle expectation in Shitsville. The designers down here are competent but the phone web reality itself is an idiot, asshole design.

These are screen grabs from Saudi television. I know that Memri TV attempts to make Arabic/Muslim culture more transparent to the west but I don’t know how these stack up in terms of intensity. Are they average moments of television or extreme? I can’t place them solidly in context where they belong but I also know that liberal westerners under-imagine the hostility to humanistic cultures and how far outside our norms of accepting diversity conservative Muslim cultures are.

I can tell you you that this is not like selecting the very worst of Christian broadcasting in the United States – this is much closer to mainstream in Saudi Arabia which makes no pretense of loving those outside its cultural signature.

Attack of the filter bubbles

or: Deconstructing this strange, stupid moment

Have you noticed that humanity seems to have gotten into the bad acid? Or that reality isn’t itself lately? Traditional limits to weirdness have been breached and allowed just about anything to happen. If our recent political history was a spy novel would you keep reading it? Or throw it in the trash for being provokingly unrealistic? Trash, am I right?

You’ll be relieved to know I have a theory.

One of the things I ramble on about here is the idea that the human race is technologically self-mutating. It’s part of our script to wrangle and then embrace new technology and rather than using it to perfect our old lifestyle, we let it alter us and transform that lifestyle.  Throughout our time on earth, this pattern has changed us sometimes in hardly noticeable increments, and sometimes with disorienting speed. While the core of human nature remains constant through history every big technology shift distorts our current culture and creates unexpected “new normals”. These new normals cause stress and static as we try to sort out what the hell is happening to us and how to retain the good part of the new tech without losing the good of the culture.  Since we are in constant flux there is no pure version of ourselves to return to or protect. Many of the normal things we grew up with were new normals to our parents or grandparents. We typically only embrace technology that gives us something we want and then we suffer and struggle over the weird “Goeswiths” we didn’t anticipate. It’s significant that there is no historical example of us adapting to powerful new technology, disliking its effect on our culture and dropping it to resume the old ways. Our way ratchets forward and locks; no take backs. The bad side effects only go away when some still newer technology dissolves them.
Cars redefined teenage freedom and liberated our sexuality. They changed socializing and working and vacations. They changed the layout of every towns and city. The economics of cars created enormous corporations and a unionized middle class. Year in and out, cars kill ~40000 Americans and it appears we’re basically all OK with that. Technology is never just technology. Technology is new organs and altered cultures and unexpected results. Sufficient technological change equals a different species.  END_OF_DOCUMENT_TOKEN_TO_BE_REPLACED

CenturyLink (Paul Allen’s company) missed an awesome opportunity. They are going around talking up their high speed internet, etc. But they have created packages and prices EXACTLY like comcast. They could have arrived as a total hero, breezing into Seattle selling affordable internet with no strings attached and people would have LOVED THEM. They gave up a stellar opportunity to go into business and have people breaking down the door to give them money, while joyfully thumbing their nose at comcast. My God, the customer loyalty they would have had and the tidal wave of popular support from new markets.  END_OF_DOCUMENT_TOKEN_TO_BE_REPLACED

Benjamin Bratton reveals the truth behind the “happy pill” that is TED talks.

It’s a short sharp shock for TED but hopefully corrective. The point isn’t that TED should shutdown but that it should splash a little water on its face and notice how formulaic it has become and how it actually steers clear of real problems, preferring happy talk.