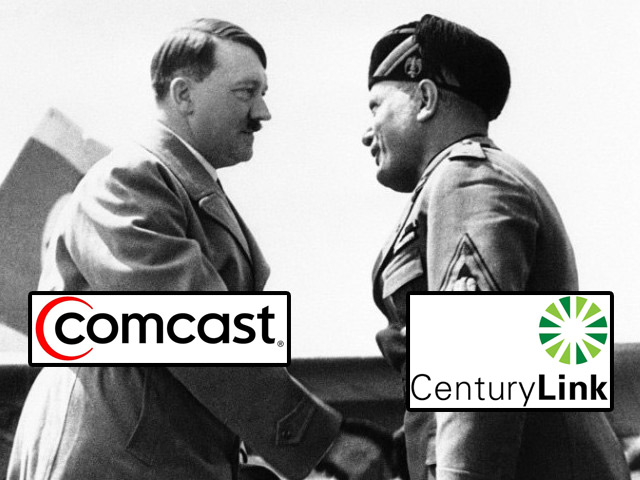 CenturyLink (Paul Allen’s company) missed an awesome opportunity. They are going around talking up their high speed internet, etc. But they have created packages and prices EXACTLY like comcast. They could have arrived as a total hero, breezing into Seattle selling affordable internet with no strings attached and people would have LOVED THEM. They gave up a stellar opportunity to go into business and have people breaking down the door to give them money, while joyfully thumbing their nose at comcast. My God, the customer loyalty they would have had and the tidal wave of popular support from new markets.

It’s actually worth thinking about the mindset driving this. We know high speed internet is a monopoly business. We know comcast is, year after year, the most hated company in America. We know they don’t do their job well and that they do not offer the product that the public wants but they work tirelessly to keep consumers stuck with frankly, shit. Now Paul Allen, who I imagine took some time considering what he wanted to do here, attempts to emulate everything that is messed up about the current situation with zero desirable alternative choices. He is doing the exact opposite of what is supposed to be the genius of the free market: That companies who meet the needs of the market better DO BETTER. Instead we can see a shocking lack of interest in doing something exciting and making something people want. We see a man who clearly identifies as a monopolist and just wants a piece of that big fat pie. He identifies more closely with LIMITING the free market than with making it work.Alternatives like Google fiber and municipal Internet options will come. Agonizingly slow, for certain, but they are coming. You, CenturyLink could have been a beloved alternative and possibly created a situation where there was little pressure to change things because people were happy. But people being happy wasn’t brought up in the meetings because none of you thought of it. Your business plan shows contempt for consumers.