We have a fleshed-out story with a lot of details not included here. At the heart are 4 terrible predicaments, faced by 4 cultures, with 4 different motivations.

The big island was originally home to six independent city-states, each ruled by their own warlords, aristocrats, or local governments. One of the city-states is an ancient theocracy, administered by the church hierarchy. An ambitious ruler of one of these small kingdoms made crafty alliances and with a series of bold attacks, he took control of them all except for the theocracy in its well-defended northwestern coastal region. Red was triumphant.

Red intimidates and overwhelms with grandeur and power.  It uses more stick than carrot but beyond frightening locals into silence it does offer them various advantageous buy-ins if they cooperate. After consolidating power on (most of) the big Island and promising no aggressive ambitions beyond its shores, red made a devastating lightning attack on the three eastern islands of Blue culture, nearly swallowing them in one bite. After a pause only long enough to resupply and suppress rebellion, they launched a spearhead against the wild and scattered green clans.
While red is very powerful this overreach has left them vulnerable and spread dangerously thin.

Yellow is the theocratic city-state holding out against Red. The Yellow religion culturally unites most of the red territory and in lesser degrees, Blue and Green as well. Before the forced unification of the red island under one ruler and state, Yellow was the politically dominant force, since its blessing was often needed by any local ruler. The priests and bishops in any diocese were truly administrators of the central Yellow authority. Yellow now faces intense competition for control and has taken a massive step down in real power which it looks to correct eventually through the military acquisition of the lost lands. In scattered places, this means overt war, but mostly they must be more cautious, and indirect, it means their theology has become very focused on undermining the legitimacy and authority of Red. Red makes steps to suppress this of course, but they too must be VERY cautious because yellow is the religion of the people and much closer to their hearts than the pomp and power of red.

The green territories are the farthest west of a vast eastern continent. The residual part of the ancient kingdom, mostly gone now. Ruins and shattered landmarks of a faded culture are found everywhere, mute about their downfall. In the south, there is a pass through the high mountains where the green peoples can move east and trade. To the north is an area of cold and snow.

The green clans live half settled and half nomadic. Vast clan farming areas are lightly administered by the family-based leadership, mostly groups of generationally structured siblings, parents, and grandparents famous for squabbling within ranks but showing unity against external forces. They farm throughout the spring and summer and then, after harvest, they wander and camp alongside the huge seasonal migrations of musk elk. This culminates in larger and larger gatherings of the clans and an ultimate solstice festival where athletic, bardic, and music competitions allow room for peaceful contact, trade, and for young men and women from different clans to meet and change their lives.

Green has never had external ambitions. Their lifestyle is their horizon. The only thing that could turn them into a unified army is facing a unified army bent on taking control away from them. Still, thinking beyond their local concerns doesn’t come naturally to them, they tend to cohere and operate only at the clan level.

The small northeast island is home to the capital city of blue. It was never taken by red. The entire island is super mountainous but even more so at the northern end. All Blue cities sit high in the mountains.

Defenses:  Moats and walls surround the capital city. Rising up the mountain with the city is a series of rings of moat and wall defenses that can all be locked down meaning that even the capture of the outmost wall would have to be repeated over and over again …uphill many times to capture the city.
The walls are super thick and constantly patrolled. Passageways within the walls are used as roads by the residents but mobile catapults and cannons, etc. can be quickly pulled by teams to wherever defense is needed. The walls have openings to shoot from.
At sea level, a deep moat has been dug around the mountain’s base creating a deadly, churning barrier to any approaching army. The mountainous city is at a very high altitude. The residents are used to high altitude and attackers would never be at their best while attacking.
Each ring, especially those lower down, contains terraced farms which angle in toward the mountain rather than away from it. The mountain reaches above the snow line. The top is deeply snowbound, and freshwater streams run downward all year, filling fountains and moats below as well as irrigating crops.

Several very different races coexist happily within the Blue culture of mutual respect and practicality. Dwarves play a big part in hewing the rock, mining, and building the walls, Humans brought abundant farming, engineering, arts and crafts. The Drakes/Salamanders provide a kind of enlightened governance. They respond to corruption as dogs do to lemon wedges.  It isn’t that they are perfect angels, they just seem to have a gift for managing things and they lack the kind of greed that wants to dominate or the kind of fear that allows themselves to BE dominated. They see overlapping interests and mutual aid as obviously good things allowing all to be richer, freer, and safer. 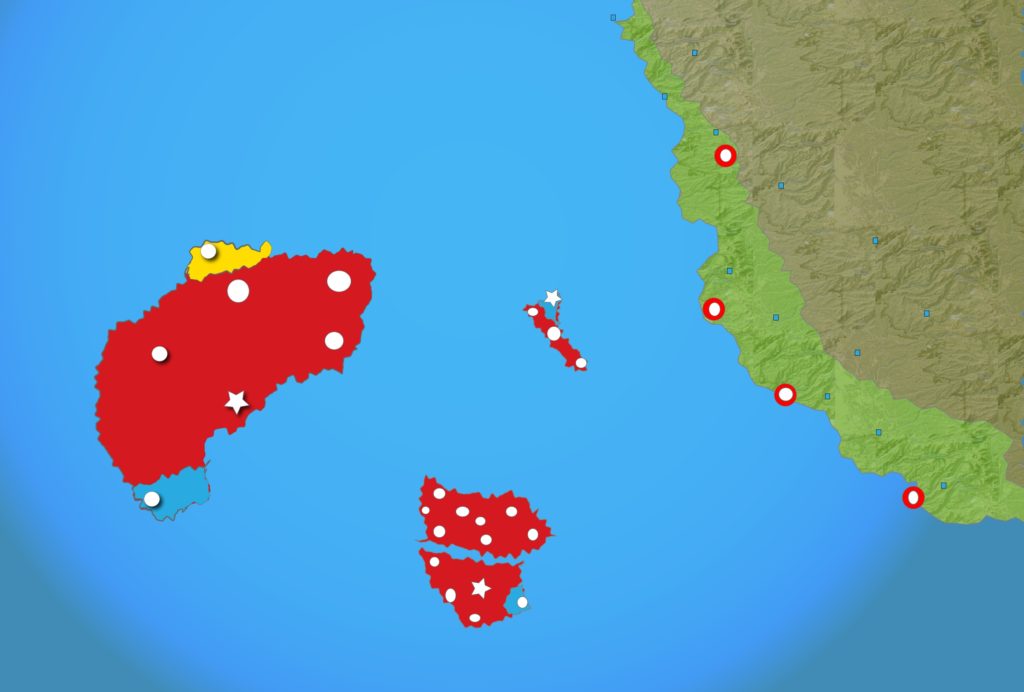 Here’s the recap.
This map shows general control of territories and population centers by team color. However, the only really dense populations are in the small blue and yellow areas. Red is everywhere but again, much of its territory is wild and empty, and its forces are spread thin across the large area they need to hold.

Also, while Yellow only physically controls that small area on the northern coast, it owns the red territories culturally as the home of the traditional religion. Red is forced to care at least a little because violations of the old religion’s values cause hot spots of resistance in otherwise quiet towns. Too many of those could dangerously weaken Red. Yellow has powerful spy networks centered in the most traditional religious communities.

Blue culture is diverse, eclectic, and highly cooperative. Their small territories are nearly impossible to capture through a combination of natural and invented defenses that makes any assault falter from exhaustion, hunger, and constant exposure to attack from above.

Green is very thinly populated with small semi-nomadic communities. Since they are flexible about where they live and travel half the year, Red can’t easily control the population. When crowded by Red, the Green culture just slipped away into the wilderness where they are comfortable but Red forces depend on shaky supply lines to follow. The best Red can do for now is control isolated areas with military encampments the size of small cities.