My son is quiet and often deeply inside his own thoughts. He paces and thinks, sometimes for hours. I gave up asking him what was on his mind very often when I realized that he was always working on something in there and that interruption and changing social gears took a lot of energy. A couple of years ago I was sitting on the couch and he suddenly said: “Dad, I’ve been thinking about a game lately, do you want to hear about it?”

He began verbally unpacking his project and it was this ornately detailed framework for a video game. He was describing it to me at a very granular level and I gradually began to understand the gestalt of this massive thing. “You’ve been carrying all this around in your head?” I asked him “How long?”

He responded: “Yeah, a couple of months I guess.”

I decided this thing needed to be written down because it was amazing and otherwise it would eventually fade away unseen. Whenever we saw each other for a few weeks after that we’d talk about it, with me sort of interviewing him and organizing the results. The content in the writing is all him, polished a bit by me. Further into art direction and UX design and such, there’s more of me but always agreed between us. He is the lead. I created a lot of graphics to make it easier to imagine things, I can’t take full credit for 90% of these images though, they are mostly composites.

This is it. He is extremely self-critical and now looks on this with embarrassment that it will seem really juvenile and amateurish. I don’t know what to do with this but I want to share it with you and hopefully hear a few thoughts back about what you think.

We both love the classic game, Team Fortress 2 (TF2). Isaac borrowed its internal structure when he dreamed up his own game. TF2 is a huge inspiration and a good starting point to imagine the game we are building. TF2 is one of a kind, a complete original, in the ocean of the “first-person shooter” genre video games. Multiplayer games of guys running around a 3d map shooting each other are as common as dirt. For example, Call of duty, Battlefield, Halo, and many more clones of these. They tend to be extremely predictable and flat: An excuse of a story, thin cardboard characters, and pedestrian art direction.

Diverse things that make TF2 so good, and ways we borrowed them a little…

There is a win or lose objective and winning requires luck but also strategy, practice, good choices, good timing, and working with others. The strategy side of the games is deep and complex but built out of simple things. You can never completely own success in TF2, and that helps to keep it alive.

Choices that Synthesize as Gameplay: 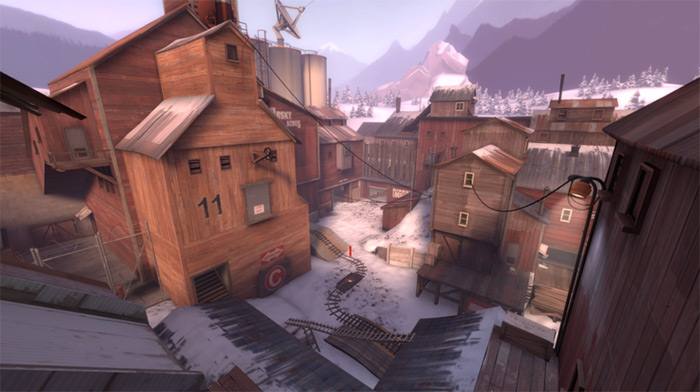 In the other shooting games being tough and hard is a humorless and essentially flat business played out by against a backdrop of blighted cliched warzones. TF2’s art direction is seamless and brilliant. In TF2 you are a cartoon lunkhead. It’s almost as if the Three Stooges expanded to nine and each had a special job to do. And the maps where the battles take place are like a blend of world war 2 era American realistic paintings and bugs bunny and roadrunner cartoons. These are well-worn barns and factories decorated with beautiful but hilarious old-style painted wall ads like “Old Geezer beer”.  Nine classes of battlefield types and nine associated cliche goofy to ridiculous personalities. The brilliant thing the makers did for these classes was making movies and stories and even comic books where the starring idiots had backstories and personalities, etc. and really took on a recognizable persona.

In most bang-bang games the personalities barely exist or are just formula rubber stamp heroes. Check out the personality of the Demoman.
Meet the Demoman
And Ms. Pauling is only a peripheral character but check out the humor in this bunch of voice lines recorded for her character.
There is nothing specific in these particulars that we want to borrow. Getting too close to TF2 styles is to become instantly derivative. We are borrowing ideas about structure and aspiring to many of the “values” of TF2, it’s attention to art direction, character, and story.

Fun characters, a strong underlying story, and a vivid and unique visual sense of place are key to our game.

3. Joining in and Playing

The player enters TF2 and searches out a game server playing the kind of game they want to join Yes, this is typically multiplayer, played against other people on the web, although a single-player mode is available as well. Either way, you are on either the Red or Blue team, fighting towards the completion of several goals or trying to hold the line against those goals. Rounds last a given number of minutes. You Respawn if your character is killed. You can pick another class when respawning if you need a change. The gameplay is intuitive and flowing, movement is easy and attacking instinctive.

This is what happens in our game:

Each real-world player has chosen a character and a team, then been dropped into a map to battle along with their comrades toward strategic (and opposing) goals.