Chicken Soup for the Delusional Soul

A Short Taxonomy of Denial and Mulishness

“You can beat 40 scholars with one fact, but you can’t beat one idiot with 40 facts.” –Mevlana

Watching a fly repeatedly bonk into a window to get outside we shake our heads. That fly seems like the dumbest thing on earth, but if we encountered an invisible force field preventing us from leaving the house through an open door, I bet we’d spend half an hour throwing ourselves at it. The moment we figured out a practical solution we’d drop the failed approach and never look back. Of course, right?

In many aspects of life, the answer is no. The average human being probably has more than one life issue where they reject solutions and embrace failure. We may be more loyal to our failures than our stated goals.

This behavior is known as Escalation of Commitment and the mindset enabling it is called: The Sunk Cost Fallacy.

Escalation of commitment is a human behavior pattern in which an individual or group facing increasingly negative outcomes from a decision, action, or investment nevertheless continues the behavior instead of altering course. The actor maintains behaviors that are irrational, but align with previous decisions and actions.

Economists and behavioral scientists use a related term, Sunk-Cost Fallacy (aka commitment bias), to describe the justification of increased investment of money, time, lives, etc. in a decision, based on the cumulative prior investment (“sunk cost”) despite new evidence suggesting that the cost, beginning immediately, of continuing the decision outweighs the expected benefit.

The classic example is people who go bust on a stock purchase by tenaciously riding it down one devaluation after another until it craters. From the outside, it looks like they drove off a cliff despite having every opportunity to …not drive off a cliff! In any investment, there are more things at stake than the obvious ones. Internally, they made a series of decisions shaped by loyalty, denial, magical thinking, social embarrassment, AND their earlier decisions.

Here are two likely areas to make you hunker in the bunker and here is what that sounds like:

Most of us are caught somewhere between compromise and refusing to compromise, a place that isn’t quite either: living in half-assed misery and so-so happiness. I’m not suggesting everyone should cash in their chips on commitments and choices. I’m just audio micing some of the most common voices in the head as we mull things over. Many of the voices aren’t even this obvious, they surface as sighs and twinges of regret that we dutifully ignore.

Of course in culture and politics, we begin to encounter philosophical and team-based intransigence.

When you consider all this auto-pilot cussedness you have to wonder what the hell is wrong with us. Don’t we sound just awful? When beliefs are threats to the safety and autonomy of a community they are clearly toxic. The beliefs of Nazis or the Khmer Rouge are cultural poison gas and the most common sense response is hitting them with a frying pan till they stop moving.

But day to day human inertia and resistance, even when it’s infuriatingly dumb, is a feature, not a bug. From nature’s point of view, we are a hive species that operates through massed individual actions but above the pay grade of those individuals to interpret. Your prickly intransigence in certain areas is pretty much your marching orders from human central. Whether you are conservative, progressive, religious, atheist, narcissist, or concerned citizen you are a die-cast component of a bottom-up, beyond-control species life script. 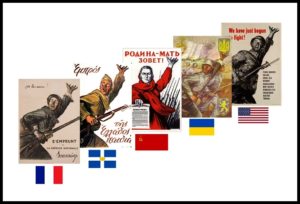 In that situation, we have a minimal, shared global language for taking care of existential business without words. Like dogs and cats, we have symbolic body language communicating all sorts of things about how we feel. There are global facial expressions, gestures, and vocal tones indicating things like I am harmless, friendly, afraid, confused, sick, etc. These are universal enough that we can read each other pretty easily about simple things without a spoken language in common. * END_OF_DOCUMENT_TOKEN_TO_BE_REPLACED

END_OF_DOCUMENT_TOKEN_TO_BE_REPLACED

“I could be bounded in a nutshell, and count myself a king of infinite space, were it not that I have bad dreams.”  Hamlet, scene ii

When I was a college boy many, many years ago I saw a cat.
I saw a cat and the cat was acting like a cat.
The cat was catlike and there was nothing about it that was anything BUT catlike.

This was a revelation and like most revelations it loses practically everything in the translation from shimmering vision to paragraph in black and white.

He was stalking and playing and being curious and easily startled and all sorts of catty things that anyone could predict. What filled me with awe was the fact that this cat had a nature and that he could do nothing that was not of a piece with that nature. The word nature comes from the Greek natura meaning “essential qualities, innate disposition” and that is the sense in which I mean this. I saw that cat as an expression of the essence of “catness” but not as some platonic ideal, I saw it as an instance of a running program. The program “Cat” existed in millions of instances all over the surface of the earth and I was watching a single instance of it having a nice moment in the Florida sunshine. END_OF_DOCUMENT_TOKEN_TO_BE_REPLACED