Apophenia: The liar inside. 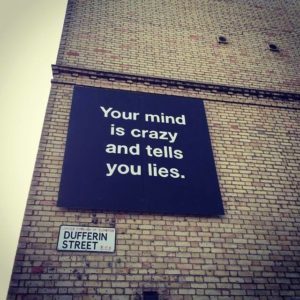 “The unmotivated seeing of connections” accompanied by a “specific experience of an abnormal meaningfulness”. — Klaus Conrad

More simply, Apophenia is seeing connections and meaning in data because we want it to be there, not because it really is.

One classic example of confirmation bias is a gambler, excitedly seeing meaningful patterns in random information and sensing a coming streak of good luck based on nothing real. But interpersonal confirmation bias is very common and typically awful for both parties.  I once had a painful encounter with this in myself, in a social situation where I consistently misunderstood social signals until I lost a friend. It’s shocking how compelling and believable your own apophenia can be. The dawning realization of having been completely wrong and completely certain is mortifying but also frightening: You’ve been out of touch with reality, and you were not in a relationship with another person, just yourself and your dream. How can you feel sure of any footing once you’ve led yourself to disaster? “Fool me once, shame on you, fool me twice, shame on me.” but in this case, all the fooling and all the shaming is on me. Damn it, brain. I suspect this sort of apophenia correlates strongly to an emotional need for comfort. It’s an opium-like form of self-reinforcing belief that takes away the pain even as it sets you up for more.

The most basic survival need for any organism is to recognize the meaningful information and patterns around it. A little anomaly in the shadows of a bush might mean a tiger. A twinkle of a certain color in the distance could be fruit. If a sudden unexpected sound or movement puts you on alert it means your copy of this software is up and running. The neurology of patterns and meanings is essential from raw survival to subtle nuances of communication. There are patterns to be recognized in faces, voices, and body language: There are patterns in the weather and in the nightly news. This function is our guardian and navigator in everything we do. Discerning the signal from the noise is the foundation of being in touch with Reality. This isn’t Apophenia, this is pattern recognition.

Apophenia is the name given to this sense of pattern and meaning at the point that we become partisan and embellish our subjective perception, emphasizing the preferred meaning of a pattern.

There is a healthy version of Apophenia and a toxic version. Healthy Apophenia is generally invisible because it creates no (serious) conflict with reality. Almost everyone’s spiritual and political beliefs are healthy Apophenia. Not healthy in the sense of highly recommended, more like not poisonous. Toxic Apophenia can be viewed as a spectrum disorder because it emerges directly out of these same essential brain functions but as beliefs that war with the outside world.

I’ll use the example of Autism as a spectrum disorder for comparison.

All of us fit somewhere on the Autism spectrum. This does not mean we are all autistic, just that autism can only be measured and described in contrast to “Not Autism”. We have our personal “settings” for all the well-known issues of ASD people such as sound sensitivity, dislike of eye contact, social deficits, etc. We might be socially warm, making intimate eye contact, and not at all bothered by noise but we are on the same spectrum or there would be no contrasting perception describing Autistic behavior. What makes a person “Autistic” is the degree to which their personal settings cause friction with the “normal” world. We stop calling people Autistic when the friction is mild enough that a diagnosis isn’t necessary. This is simply where we stop measuring the spectrum, not where the spectrum stops.

Toxic Apophenia is recognizable friction between OUR reality and REALITY itself. It is a meaning disorder. It is the dangerous stalker or the unstable zealot.

If we have any kind of subjective outlook on life, we have a case of high-functioning apophenia. Subjectivity and “reality favoritism” are unavoidable because to have any point of view, we highlight certain data points in the world as more meaningful than others. We prefer these data points. They support the narrative. Of course, there is no absolute objective reality that we could all be perfectly in touch with. Significantly, THAT belief (in one real truth) is a common symptom of toxic apophenia. A properly functioning person is loaded with biases and subjectivity. A bit of Apophenia is universal and we can consider it part of our homeostasis. It’s part of how we have a fix on our personal life and beliefs. If it means we gloss over a few discrepant facts or get into some arguments, there’s usually no serious price to pay. A bit of friction is just human background noise.

In more serious Apophenia, beliefs become obsessive. Not because the person simply has bad information, because that bad information takes root and grows disproportionately important, inflexible, and unquestionable. Mistakes aren’t corrected, they are defended. Apophenia almost behaves like an allergic response; eventually, any truth outside the story is treated as antigen. It is an inflammation of belief. That belief becomes our prime motivator, a terrible advisor, and somehow, an essential part of our self-definition. It shows up as an opportunistic infection alongside addiction and co-dependency. It is dogmatic and generates black and white stories. Often it is a willful rejection of any relationship to others, becoming a protective wall around mono or megalomania. Apophenia is the mechanism and the very foundation of conspiracy politics. Viral memes and vulnerable people are the breeding ground.

Notice how isolated they all are. In some cases, a natural group of “new best friends” comes with the obsession. Unfortunately here, a like-minded community only reinforces the seeming importance and truth. All backs are turned against the outside world and all its damned lies. As the levels of obsession rise, barriers of acceptable behavior are knocked aside. In the worst-case scenario, there is a literally terminal stage when violence and self-destruction occur. These are people it is hard to feel compassion for because they all display unpleasantness or worse but my gut tells me that way back when the obsession is just a tiny glimmer, coming into being, that hopelessness, loneliness and a desperate need for meaning are the sparks that start the fire. The new obsession arrives feeling like a lifeboat, like a rescue, like an escape to a safe place. Much like serious depression, it cuts the person off from the world and rejects opposing views. For many with serious Apophenia, the story leading to their downfall must feel like an answered prayer and a reason for living.

All these people are desperately filling a painful void with a poison that they have mistaken for an antidote. In apophenia, you don’t hold the belief, the belief holds you.