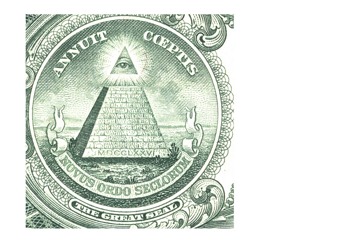 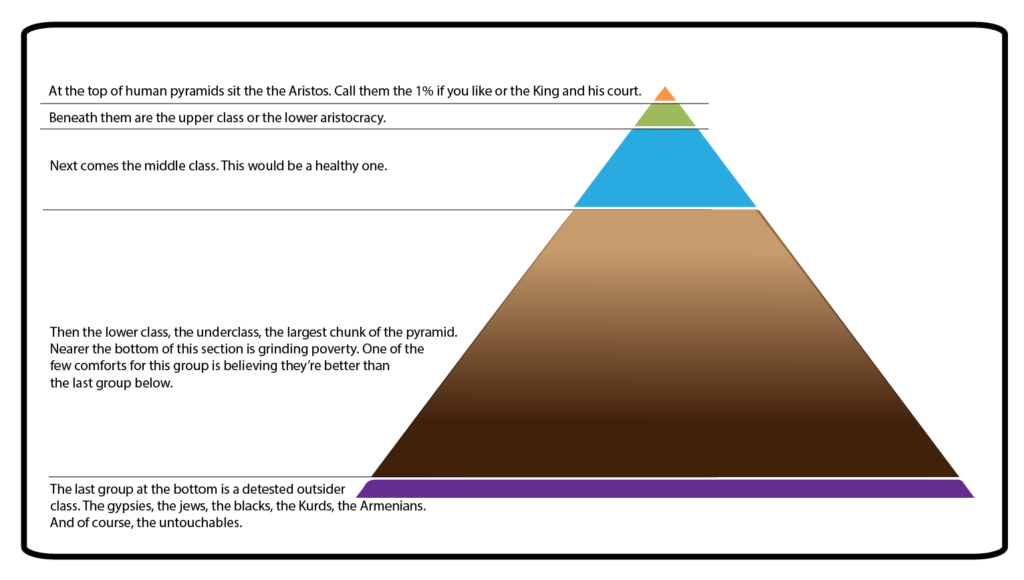 This is the hive pyramid as it is expressed in the world always and everywhere when humans gather and set up sufficiently large housekeeping. This is the hive pyramid that exists solely because it is written into the human operating system. If it wasn’t…it wouldn’t exist, let alone exist virtually without exception. It’s basically a bunch of rules we begin observing triggered by the size our community. It exists to allow our super-organism to live and maintain and compete against others. It does not have your happiness or mine on the to-do list.
The Hive Protection Program brings powerful forces to group us together and whip us forward:

A certain coldness and cruelty is built right in. It is a traffic mechanism for directing and controlling the flow of self interest into the arteries of the hive. It’s a local game mistaken for an eternal truth. This has been witnessed by those with sympathies for the poor, and it elicited visions of communism…a forced correction to balance accounts, but it failed because the program is inherent to us and within a communist country the pyramid will quickly emerge from the collapsed state, Raising a few privileged commissars skyward to control downward.

The other side of that vision has been seen from those who worship the powerful and often self identify as aristocrats. When these sort describe their vision it is one of complete self justification. The pitiless Ubermensch towering amorally above the weak and stupid and helpless. This is the Randite vision of heartless self interest as the highest good. Generally the rich think they are the awakened ones even though they are just another robotic piece of the engineering, albeit the best off.

One point of my message is that if we look hard enough we can make the thing out, we can see the mechanics and stand in awe of the program that organizes and drives us. The other message is that we can begin to make some choices to be a grown up species or at least small groups of grown ups making choices to look at things in a fresh way. To look at this structure and decide for ourselves what we want to keep and what we want to get rid of. Do we REALLY want to dominate? Be dominated? Hate things robotically or support things robotically?

The getting rid of part is tricky because every new generation of humans comes into this world pre-programmed to recreate the pyramid. And they will unless we learn and apply some sort of technological solution to reprogramming or over-riding or bypassing these hard wired routines. It is also a possibility that we simply can’t and we can never be anything but helpless passengers on this ride no matter how clearly we see it … but I don’t believe that is true. I think there are ways or there will be, and as I will detail elsewhere.
For now I just wanted to point out the pyramid and describe the mechanism .

Stable and Unstable Pyramids
Our evolutionary program sees some shapes as too volatile – If the base narrows and the mid section elongates – a smaller poverty base and a bigger, more empowered middle class (as in America while there was a factory base and strong unions) – the program acts to “correct” the increasing equality, exactly as we have seen for the last 40 years as the angry rich have squashed the enlarged middle class back down toward poverty.
There is little reverse correction however…If a society is an extreme pyramid, one with a tiny top section where most players know each other and a very small “middle” also near the top athwart an enormous base of poor and helpless this kind of arrangement can continue indefinitely. Its “center of gravity” is in a natural position according to the program.
This is not to say that there is only one flavor, in the Norwegian countries where Democratic Socialism is well rooted the pyramid is still real but it is less repressive and more egalitarian. It has this stability because that egalitarian world view is deep in the natures of these comparatively reasonable humans.