Standard rules of NSFW. Graphic nudity and sexuality: And the boss walks up behind you in 3, 2, 1… 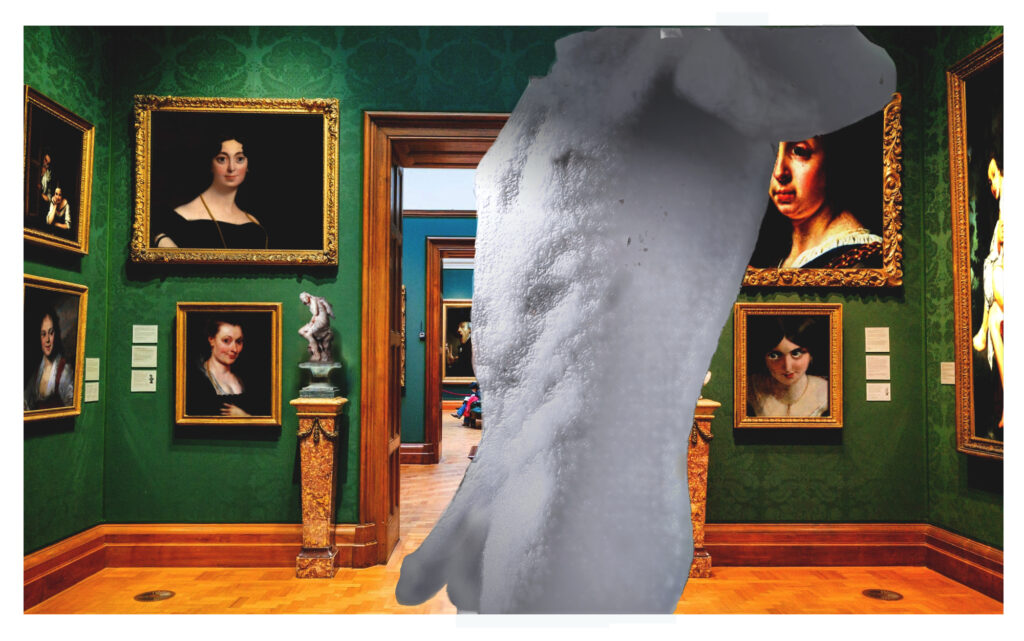 Note: This is a writing exercise exploring an important memory, but one that existed like a collection of facts without much context or meaning. I find when I use writing to explore a memory that the lights come back on, and details lead to meanings along a narrative path. Every time I’ve done this I’ve been given a fresh understanding with relevance to my life in this very minute.

In college, (in Florida) during Freshman orientation I met Ally. We had nothing in common except for an instant liking for each other. Something about the other brought out the loving and playful side of us both. We had silly, warm-hearted fun every time we got together, and that was a lot. I was friends with her and her roommate, Laura, and spent time with them almost every day. Ally was tall, slim, and blonde, a bit angelic. Laura was pale with black hair and blue eyes, beautiful really.

Randomness made them roommates but they had good friend chemistry and shared the cultural reality of being good girls from the conservative, Christian south. They were both sheltered, innocent, and upright. They dressed modestly. Whereas I was some sort of oddball from the liberal agnostic dimension with a good bit of sex and drugs in my experience bank. I was a shameless male slut and good at getting into sexual situations. In fact, by this age, I had managed to be kind of a shallow manipulative asshole sexually multiple times. This isn’t ugly bragging at all, just truthtelling. Here’s the odd thing, attracted as I was to both Ally and Laura, I just loved them innocently and couldn’t have MADE myself seduce either of them. I understood half-consciously that that part of me wasn’t good for people. Spontaneously, I wanted to be good for both of them.

This doesn’t mean we were prim and distant. I’d visit and I’d talk all kinds of silly crap that made them laugh, then maybe they’d make us tea and we’d eat oranges together. Soon this would devolve into orange peel wars and finally into grunting and groaning wrestling matches across every surface in the dorm room but the ceiling. END_OF_DOCUMENT_TOKEN_TO_BE_REPLACED

Years ago in my early 20s, I enrolled in a massage school in the San Francisco Bay area to get my license. There was an academic side of studying anatomy and physiology, and a practical side of learning new techniques and alternating massages with the other students for several hours each time we met. At the end of the course, we had to pass the anatomy/ physiology exam and give a practical demonstration of our massage skills. We met twice a week for a couple of months.

On day one, the group was me, one older guy, about 10 or 12 women in their 20s and 30s, and the 40ish woman who ran the school. On day 2 the other guy quit. For the rest of the course, I was the only man (naked) in a big open room full of massage tables and naked women. We were all naked, giving and receiving massages, except for breaks until the end of the day. Possibly this was to burn out any tension about nudity, if not it was just the culture of San Fransisco in the 80s. Come to think of it, it would have been really awkward dressing between rounds only to strip again minutes later.

I was comfortable with social nudity and although the situation was kind of abstractly exciting (mainly while anticipating everyone disrobing) I found that while giving massage I naturally tuned in to the personal and vulnerable story each woman’s body had to tell. Stresses, strains, and scars are written on the skin and in the muscles, and emotions like shame or sadness could be felt while passing through certain areas. The main feeling evoked was compassion. I didn’t get a hard-on because the vibe was clearly non-sexual. Context matters.

The memory that still sizzles a bit was one day when I was on the table face up, and the woman massaging me was working my thighs. This is almost an automatic erection trigger for me and I went to full extension in seconds like an inflatable emergency liferaft. I just had enough time to think “Eek!” and start mentally hissing at my dick like a misbehaving child in church. “Sit DOWN, sit down right now!”

When suddenly our teacher was at the foot of the table and calling the class to gather around with an “Oh look what I found!” tone of voice, and they did, 11 naked women gathered in a half-circle at the foot of my table, calmly staring at my hard-on. I took this in with one glance and focused instead on the ceiling. I would have expected him to roll up like a sad snail but he responded to attention like a confident runway model.

Paraphrasing, she said: “This happens with male clients all the time. Erections are spontaneous. It’s normal, often completely innocent, and nothing you ever need to do anything about.” A few students had questions and she answered them simply, and light-heartedly to reinforce the message that it was normal and no big deal.

I suspect she’d been wanting (and waiting) to make this point with the group and I was the only one present who could demo the uh… situation. I just laid there… pointing urgently at the ceiling and feeling the eyes on me in a kind of waking version of the showing-up-naked-at-High-School dream till she dismissed everyone back to their tables.

My masseuse returned to work carefully “avoiding the issue” with both of us feeling more self-conscious than usual for the duration.

Visual Journal 2nd Half of March 2020

File or Program not Found

A friend of mine sketched this sex-robot doodle and I…fleshed it out a bit. Isn’t Celexa an anti-depressant? Does anyone actually find whips and chains sexy? 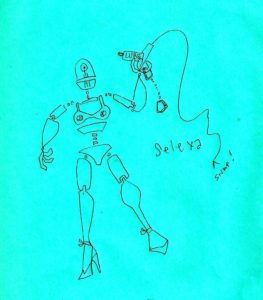 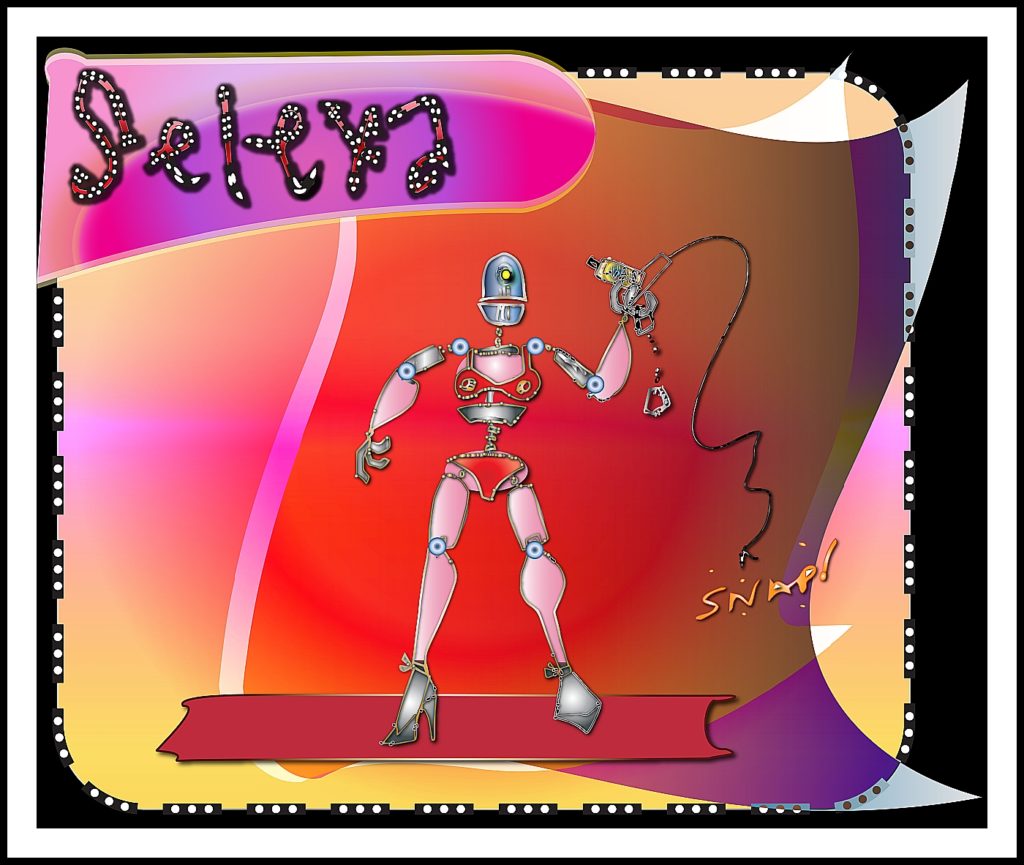 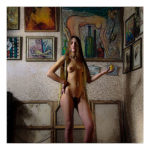 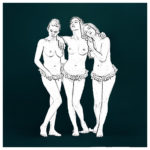 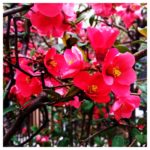 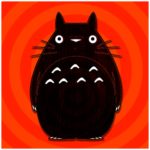