The smug, unloving fuckos checking under your couch pillow for and small change you owe them. The richest and smallest of us.

And we scientists don’t know how to do that.”

–Gus Speth, a US advisor on climate change

Winners interpret good luck as merit-based, even when the rules overtly favor them and no skill is involved.

When I notice evidence-based research relating to my articles I am adding them.

“At the end of their game, people were asked if it had been fair. Regardless of the conditions, winners were more likely to say yes than losers. Even when the winners benefited from receiving either one or two strong cards from their opponent, they were twice as likely to judge it a fair game as the losers. What’s more, in most versions of the game winners were more likely than losers to attribute success in the game to talent – even though the game required very little.”

Link to the popular article

Abstract
Growing disparities of income and wealth have prompted extensive survey research to measure the effects on public beliefs about the causes and fairness of economic inequality. However, observational data confound responses to unequal outcomes with highly correlated inequality of opportunity. This study uses a novel experiment to disentangle the effects of unequal outcomes and unequal opportunities on cognitive, normative, and affective responses. Participants were randomly assigned to positions with unequal opportunities for success. Results showed that both winners and losers were less likely to view the outcomes as fair or attributable to skill as the level of redistribution increased, but this effect of redistribution was stronger for winners. Moreover, winners were generally more likely to believe that the game was fair, even when the playing field was most heavily tilted in their favor. In short, it’s not just how the game is played, it’s also whether you win or lose.

From here to Monopoly

The Landlord’s Game is a board game patented in 1904 by Elizabeth Magie. The game was created to be a “practical demonstration of the present system of land grabbing with all its usual outcomes and consequences” 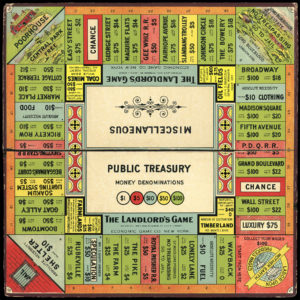 Posted in Just Interesting, The F***ing 1%

Manufacturing jobs are gone. The only way they could come back is if American workers volunteered to get paid .25/hour.

How will the rich continue to get richer?

There are SO many bad outcomes possible from this. The collapse of these jobs won’t occur in a vacuum, it will take most of the economy down with it. All those out of work people won’t go out to eat, or buy new clothes. They won’t buy much of anything. This takes out most of the local economies and big chains will see a steep drop in earnings.

There are other aftershocks: Most likely none of these folks will have health insurance and they may very well turn right wing fascist politically because that’s pretty standard is collapsing economies. Maybe they’ll open leftward but history shows that as less likely.

Since people are complete shit at imagining and preparing for future problems and will even perversely struggle against such preparations (*cough* cough* climate change) I think as many of us as possible should be raising this issue. But that won’t help much because because politicians are largely paid to safeguard the status of the super rich. If it comes to a political fight we’ll just be locked down and silenced. Unless we frame it correctly.

Who will be the biggest victims of such a collapse? The rich! Poor people have nothing, what’s a little more nothing to them? But the people who have nearly everything and whose only wish is for the rest of it as well, suffer deeply at even flattening profit margins.

It’s true. When the jelly handed 99% stop paying for things, your personal ultra zeppelin will begin losing altitude and when you finally land do you know who’ll be waiting to greet you? Correct, the ravening mob.

The only way for the rich to maintain a semblance of untouchable, lofty superiority is to support a guaranteed basic income.  And unless they want to tumble down a financial sinkhole for several years first they better get on it now. This won’t be easy, it will involve acts that superficially resemble caring about people and being generous.

Please, help support the rich in the post employment age.

Why we need to plan for a future without jobs.