Religion is the cultural pheromone to define insiders and outsiders, and it is a local municipal code. Hackneyed myth and dogma.
But it is also our relationship to the divine. The heaven that is deeper than hell. The transcendent reality. I don’t believe in any god I’ve heard of, but I feel the numinous powerfully every day. God only knows what will end up in here. 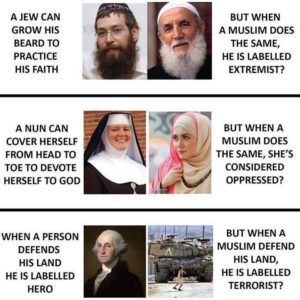 A friend put this up on Facebook and I just can’t let it alone. Again, I’m liberal politically, and I long for us all to get along. But there is a self destructive streak in the tolerance movement which blames people for reacting in ways that aren’t blindly accepting.

1. Beards: I don’t think the beard thing is an especially big problem for Muslim men, but to answer WHY, which seems to be the question: I might guess a jewish fellow with a full beard was a bit extreme, but it wouldn’t matter to me because they represent no threat to me, historically or statistically. When that look is part of the uniform for the very high profile danger of Islamic terrorists our brains connect it to risk. Our brains are shaped by evolution to look for patterns that mean danger.

2. Habits vs Burkas: Very few nuns still wear the habit and when they do it’s part of the uniform for an order that takes them OUT of normal society. In cover-up cultures it isn’t devotion to god, like the nuns, it’s an inflexible societal norm. There are many Muslim women who feel OK about covering up but in many places no choice is allowed and physical danger or at least loud and intimidating disapproval is a likely outcome to NOT dressing that way. Hence, oppression.

3. Defending the homeland: The Palestinians seem to be the focus of the third picture and while right wing Israelis may call them terrorists, much of the rest of the world sees them as oppressed victims, albeit victims who often make hot headed poor choices. If it (the picture) represents any place with an Islamic culture where there’s a battle over territory then it probably does have at least some terrorist influence at play because they have inserted themselves as players in these situations.

Things Religion Can Be:

If a person describes themselves as Religious, all they have told you is that one or more of these things is important to them.

As usual, I’m thinking “out loud” here. I guess that means, awkwardly, and in public.

Anyone who is thoughtfully worried by Islam finds themselves in an awkward position. On one side are traditional right wingers who don’t like Muslims because they are outsiders and immigrants. This is just the usual “stranger danger” anti-immigration issue. This group is a range from people who are simply negative about it, to people who could easily be stirred up to violence. This is not a thoughtful and considered position. I want to wear a sign around my neck saying: “I’m not with these people”.

From the left one gets categorized as a racist for expressing fears about Islam. Considering the extreme side of the first group, you can see WHY liberals might go here. But this is also not a thoughtful or considered position.  I believe liberals are guilty of being lazy here and choosing convenience and simplicity over a somewhat complex response.

(Just a disclaimer before going on here: Scientifically speaking, race does not exist, but I need to use the terms in play as they are meant by the people using them.)

Islam is no more a race than Christianity or Buddhism. How could it be? It’s funny but both left and right are over simplifying Islam into the same thing. Outsiders. The right is focused on barring those “unpleasantly different” folks and the left is standing up for them, wanting to give a warm welcome. You know, embrace diversity.

By “rounding down” Islam to a nickname for middle eastern people and conflating concerns about it to racism, liberals are engaging in convenient short term thinking. They may also be poisoning the argument in a way that works against their central values. “Islamophobia” as a word is a cork meant to be shoved into the mouths of anyone speaking out. Since Islam is not a race, but a religion this amounts to a war on free thought and speech. It becomes a thought crime to criticize it. And all of this done underneath the banner of letting people believe what they believe.

Liberals, imagine you live in Eugene, Oregon or some other solidly left wing community. Diversity is embraced, alt-lifestyles are accepted. Suddenly a very large stream of outsiders begin moving in, buying houses, starting businesses, running for school board, etc. Consider your response if they are:

For simplicity, imagine all those groups mashed up into one. Imagine their name is “Surrender to the Power”. Imagine they believe overall:

They aren’t ALL this strict but it’s generally true. Taken person by person they are all nice enough. But they are sending the message that women in this town seem immodest. And on the school board they want make the curriculum more in line with their beliefs. Don’t be a hypocritical dipshit here. You are going to be worried and upset. That’s because these are beliefs and values that starkly contrast with your own. Education, free speech and equal rights are all being diluted into a mix with the “Surrender to the Power” system. You would be upset because your philosophical system and values are being lost. Your children will grow up in a world less free and open than yours was.

I claim the right to criticize modes of thinking and behaving

“You’re going to Hell, but I’m not driving.”

Neither Christianity nor Judaism is free of adherents who wish death for others based on their religious texts. Read about the Sabra and Shatila massacre and observe the hateful behavior of conservative west bank settlers.
But the percentage of such zealots is tiny compared to that within Islam. I think worldwide, Muslims have not reached an overall level of cultural relativity and sophistication equal to that (mostly) achieved by Jews and Christians (and non-believers). If there is a “You must be this tall to go on this ride” for peaceful co-existence it is this: “I don’t like your beliefs but it’s bad for everyone if we try to control each other”.  There are toxic ideas in Judaism and Christianity but overall in western societies a little more “live and let live” worked into the fabric of life to allow civil and diverse society to flower.
There is a good bit of bullying and rule by fear within the various cultures of Islam. We do have some Christians like this in the United States who would love to bully others with their religion. If our religious bullies gained any actual power they would be deadly. They seek political power and we watch them carefully, trying our hardest to retain separation of church and state. But religious police don’t patrol the streets, separating lovers and punishing women for dress code violations. There are no gangs of murderous Christians hacking bloggers to death for opposing the radical “Christianists”. Until the center of gravity shifts beneath the majority of Muslims to similarly downgrade their self appointed religious police force, they won’t be ready for a modern world that frankly requires diversity.

END_OF_DOCUMENT_TOKEN_TO_BE_REPLACED

The 10 Commandments (hereafter known by their DJ name, 10C) are often cited as an important foundation of morality for the west: Sort of the moral grandfather to western civilization. This makes the assumption that without them we would behave badly, that if we are behaving well it is partly due to their influence, and that people without them must behave measurably worse.  Since they are treated as a collection I assume that they are all viewed as good and basically equal in worth. Conservative politicians have made enormous efforts at times to connect them with our government and put them in front of us in as many places as they can. It’s always amusing when a reporter asks them to recite the 10C and they can pull together maybe two of them.

Since I could remember about the same number, I decided to read them over and evaluate their worth as a moral compass.

1 “I am the Lord your God, who brought you out of the land of Egypt, out of the house of bondage. You shall have no other gods before Me.”

This is a message addressed to ancient Hebrews, why it should concern anyone else is unclear. They certainly would not have considered Christians (when they came along) as an appropriate audience for this message. In fact they might well have been outraged. The last bit is interesting because it implies that there ARE other Gods but you mustn’t put them first. Theoretically, it seems to hold out the possibility of worshipping demigods if you don’t get all carried away. As far as western morality is concerned the only link I see here is too monotheism and Christianity in particular.

2 “You shall not make for yourself a carved image, or any likeness of anything that is in heaven above, or that is in the earth beneath, or that is in the water under the earth; you shall not bow down to them nor serve them. For I, the Lord your God, am a jealous God, visiting the iniquity of the fathers on the children to the third and fourth generations of those who hate Me, but showing mercy to thousands, to those who love Me and keep My Commandments.”

This appears to be a restating of the first one with a sudden very strong disapproval of arts and crafts. The emphasis on jealousy reinforces the “other gods exist” idea because otherwise, what is he jealous of? Finally there is a sub clause explaining that if you violate the arts and crafts rule he will kill your grandchildren and beyond. Message for western morality? Be very serious about Christianity.

3 “You shall not take the name of the Lord your God in vain, for the Lord will not hold him guiltless who takes His name in vain.”

Perhaps it means don’t speak the name at all, again a Hebrew thing. Perhaps it means don’t use it out of the context of worship and adoration because that is blasphemy. Perhaps it means don’t pretend you love me: YOU HAVE TO REALLY LOVE ME! In any event it’s a carrying on of rule number one as additional sub-clauses. I think the vagueness inherent in this one may even be intentional, since one is uncertain what it even means, speaking the name is fraught with the danger that one MIGHT be doing something wrong. This serves the whole “tremble before me” thing. Also, this one seems to suffer from a little self referential thought circle e.g. “Don’t do it because… I’ll consider you guilty if you do it. Because I hate it when you do that.” END_OF_DOCUMENT_TOKEN_TO_BE_REPLACED