Maybe this should be a child category of science. Obviously these concern the life sciences.

How does a cell know what to do?

A very clear, 5 minute “explain it like I was 13” introduction to Epigenetics. This is the most important new topic in the science of evolution. The implications are much deeper and broader than suggested here.

If you’d like to hear more about these implications, click this link to the Epigenetics category. This will be the first post, with the others just below.

The Molecular Basis of Life

“In every field of inquiry, it is true that all things should be made as simple as possible – but no simpler. (And for every problem that is muddled by over-complexity, a dozen are muddled by over-simplifying.)” –Sydney J. Harris

I have filled many “pages” (Okay, too many) describing the problems that go with reductionism when it isn’t used as an experimental approach, but as a pseudo-philosophy of life appropriate for non-scientists. Most people don’t have a perpetual burr under their saddle about this sort of thing: Understandably. It’s sort of the philosophical version of being irked by someone consistently misusing a word and spreading that misunderstanding to others.

Surprisingly, the best argument against the cement mattress of reductionism might not involve me complaining at all, but simply sharing the details of some complex systems and letting the observer grasp the mind-blowing nettle for themselves.

These are very well done walkthroughs of our molecular machinery; skip around if you like, there will not be a quiz later. I challenge you to watch even a little  of this without being shocked into a new open-mindedness concerning the genius underlying life. *

“These animations show cellular biology on the molecular scale. The structure of chromatin, the processes of transcription, translation, DNA replication, and cell division are shown. All animations are scientifically accurate and derived from molecular biology and crystallography research. I have composed this video from multiple animations under fair use for non-profit, educational purposes. I do not claim copyright on this video or its contents, with the exception of the cell image. Most credit goes to Drew Berry and the Walter and Eliza Hall Institute of Medical Research (WEHI TV) for the animations. Full credits are at the end of the video.” James Tyrwhitt-Drake

-* Usual disclaimer: No religious ax being ground. Not a creationist.

Mutiny in the Mommy

This is one hellacious science fact; it’s absolutely Metal. A question about the evolutionary point of menstruation leads to revealing the surprising life and death struggle between Mother and Fetus. It turns out their interests overlap only to a point. Beyond that point, it’s all cold-blooded competition; a no holds barred cage match. Suddenly, a third player appears.

“…In many mammals, the placenta, which is part of the fetus, just interfaces with the surface of the mother’s blood vessels, allowing nutrients to cross to the little darling. Marsupials don’t even let their fetuses get to the blood: they merely secrete a sort of milk through the uterine wall. However, other mammal groups, including the higher primates, have retained a more direct connection, termed a hemochorial placenta. Among humans, chimpanzees, and gorillas, its development is especially invasive.

Inside the uterus, we have a thick layer of endometrial tissue, which contains only tiny blood vessels. The endometrium seals off our main blood supply from the newly implanted embryo. The growing placenta literally burrows through this layer, rips into arterial walls and re-wires them to channel blood straight to the hungry embryo. It delves deep into the surrounding tissues, razes them and pumps the arteries full of hormones so they expand into the space created. It paralyzes these arteries so the mother cannot even constrict them.

What this means is that the growing fetus now has direct, unrestricted access to its mother’s blood supply. It can manufacture hormones and use them to manipulate her. It can, for instance, increase her blood sugar, dilate her arteries, and inflate her blood pressure to provide itself with more nutrients. And it does. Some fetal cells find their way through the placenta and into the mother’s bloodstream. They will grow in her blood and organs, and even in her brain, for the rest of her life, making her a genetic chimera.

This might seem rather disrespectful. In fact, it’s sibling rivalry at its evolutionary best. You see, mother and fetus have quite distinct evolutionary interests. The mother ‘wants’ to dedicate approximately equal resources to all her surviving children, including possible future children, and none to those who will die. The fetus ‘wants’ to survive, and take as much as it can get. (The quotes are to indicate that this isn’t about what they consciously want, but about what evolution tends to optimize.)

There’s also a third player here – the father, whose interests align still less with the mother’s because her other offspring may not be his. Through a process called genomic imprinting, certain fetal genes inherited from the father can activate in the placenta. These genes ruthlessly promote the welfare of the offspring at the mother’s expense.”

Tardigrades, known colloquially as water bears or moss piglets, are a phylum of water-dwelling eight-legged segmented micro-animals. He may be scratching his back just like bears do with trees or he may be temporarily stuck to the little bubble because of surface tension, the physics of the microbial world are very different than those of our daily life.

They are one of the most structurally complex organisms of their size. They have brains, nerves, and even simple eyespots. That might not seem like much, but they are so tiny that amoebas are a mouthful to them, which doesn’t leave a lot of room for extra parts.

These little guys are believed to have survived every major extinction event on Earth. There’s more Tardigrade fun over here! (slightly NSFW) 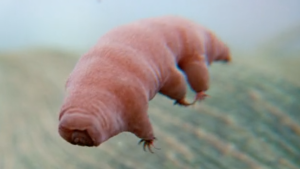 The thrilling sequel to “Guess What, Chicken Butt!”.

What triggers the processing of this knowledge?

How does the spider understand (or at least experience) the need and the solution?

How does the spider brain process this knowledge without a sort of visualizing?

If spiders can visualize physics concepts

and the parts they’ll need… and collect them…

and assemble them properly…

How should we visualize the minds of spiders?

A dye that glows brighter in the presence of calcium ions is loaded into the neurons. Neurotransmitters released by an upstream neuron in a network lead to rapid calcium influx in downstream neurons, seen here as a sudden burst of green. The influx triggers an electrochemical propagation of a signal down the length of the neuron, called the axon, and causes the subsequent release of more neurotransmitters, which signals the next neurons in the same network to fire.

The Logic of Life Initiative

This scientific initiative fucking THRILLS me.

“Logic of Life is an initiative that unifies world-leading quantitative research in the life and life-inspired sciences in Switzerland with a bold aim: To identify the rules of life that drive emergence and self-organization at all biological scales, such as the appearance of variation, the formation of spatial patterns, the division of labor, and the creation of robustness. This will address one of the biggest missing links in our current understanding of life, namely how scales are connected. Knowing these rules will revolutionize the translation of biological findings into products, services, and treatments that benefit our society”. https://www.logicoflife.ch/