The simplest explanation of the Country/ City Divide

We have always had the small town and big city split. It’s all about life strategies that use bigger networks vs those that use smaller networks.

Big cities have to figure out how to look after large numbers of people who: 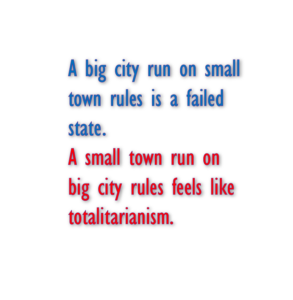 So cities are naturally liberal, figuring out plans that make things work for a LARGE number of people. And they are naturally less judgmental because of anonymity and a necessary cultural relativism.

Small towns are the opposite. You are mostly somewhere between acquainted and related with the folks nearby and it sounds CRAZY to look after a bunch of people that none of you even know. Also, there’s no anonymity – people’s actions are known and judged: Thus they are more careful and constrained. In a smaller community the actions of one person have a proportionally larger impact.

I think the context we live in technologically and culturally causes a kind of speciation. We’re all human but we become VIRTUALLY different species (that is, using different strategies to survive). The world we each live in sets up some strategic ground rules.

A big city run on small town rules is a failed state – a small town run on big city rules feels like totalitarianism. It’s a pity that this simple understanding doesn’t inform discussions and party platforms. Both big parties tend to be advocating for the ruin or unhappiness of the other’s constituency as a matter of course.

In a big city a cultural “Us vs Them” seems very different than it does in a small town because you naturally adapt to the complex and relativistic reality around you. “Healthy normal” has a broader bandwidth in the city. Politics emerges from experience and every technological reality creates a different experience and therefore a different political reality.

City/Country politics have always been a hot and ugly divide in America*. But back in the age of the public speeches we would all stand around together and listen. The full range of opinion generally was there on hand to witness and consider and discuss. Not surprisingly, the dialogue was at least MORE civil because because of being in each other’s company and following social cues. Then  from the radio to the TV and to the internet our views retreated back farther and farther into isolated comfort zones; to a zone of  homogeneous agreement. Since everyone around you echos the same views, really different views are treated as insanity or evil intent.

* Obviously city and country each contain a range of progressive and conservative types, but each will be somewhat acclimated to and moderated by the dominant reality where they are.