Trump and his wholly compromised attorney general and secretary of state have been seeking international help in discrediting our intelligence services, the Mueller report, etc. This behavior is all about relieving economic sanctions on Russia. Our government is parasitized by an enemy power for their benefit. 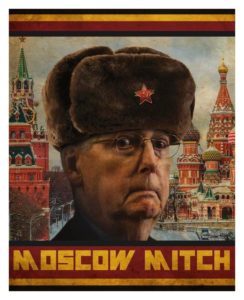 Moscow Mitch knows this, of course, and WE know that his goal is for Republicans to retain power. He has an end game he’s been anticipating for months. At a certain point in the multiplying scandals, Donald Trump becomes the thing on fire inside the Republican “car” and Mitch must either boot him or burn too. The timing is essential, neither too near nor too far from the Prez.race.  There will also be a slowly dawning “shocked and saddened” atmosphere generated in the Senate on the downbeat. As support for Trump hollows and thins, there will be a critical point of collapse. Republican strategy is always about loyalty and following orders. When Trump authority vanishes Republicans will follow orders from the highest surviving level of Republican authority…

Without Trump as a candidate, most Republican voters will “eat what they’re given”.  Perhaps it will be a surviving Pence but I suspect he’s filthy with complicity and won’t escape.  A guy like Mitt Romney actually COULD get elected in the resulting chaos and he would look like a knight in armor coming to rescue the party. Nikki Haley apparently beats all the dem candidates in a current survey (not confirmed by me). The only real difference in governing would be coherent international policies and ending self-destructive tariff nonsense. This is how the Republicans can win so it is what they will do.

Democrats need to stop imagining only best-case scenarios for themselves when picturing the 2020 election. We aren’t going to get them.