ADHD, The Pepper Moth, and the Industrial revolution.

There is a rather famous story about moths that you might have encountered as a student. The class would have been discussing evolutionary theory.

The common form of peppered moth had a pale coloration suited to hiding on the bark of light-colored tree trunks. This camouflage apparently enabled it to avoid being eaten by birds. Then, in 1848 a specimen with black wings turned up, in the industrial city of Manchester, England. By the end of the 19th century, the dark peppered moth was everywhere, and the paler, mottled version had vanished, becoming virtually extinct.

This was perhaps the first clear instance of human behavior increasing environmental pressure on local species and observers noting and following it. The industrial revolution roared up to speed and the universal use of coal for heating and industrial production had blackened skies and forests. An editorial in an issue of Nature quotes an 1851 railroad guide to the English industrial midlands: “The pleasant green of pastures is almost unknown, the streams, in which no fishes swim, are black and unwholesome…the few trees are stunted and blasted.” 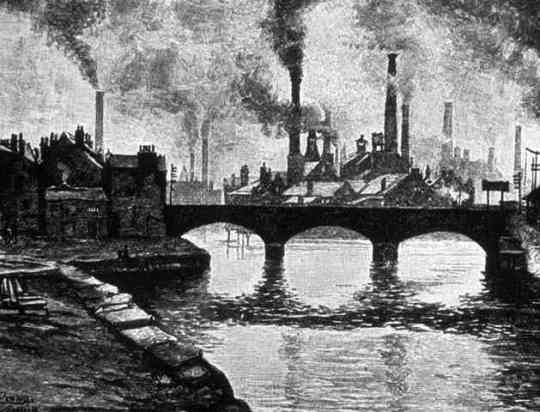 William Blake’s song, Jerusalem [“And did those feet in ancient time”] is an anthem of Britain in this period and contains a reference to the situation.

And did the Countenance Divine,
Shine forth upon our clouded hills?
And was Jerusalem builded here,
Among these dark Satanic Mills?

The images of clouded hills and “dark satanic mills” communicate the distress the English felt at seeing their “green and pleasant land” made hideous by the industrial revolution. The same kind of dread we feel today at the ominous, uncertain impact of the internet afflicted the people of this time and place but far more intensely as the healthy and beloved land was shockingly abused before their eyes.

The blackened tree trunks no longer camouflaged the pale-colored moths, and birds devoured them. The seemingly random appearance of the black form of the same species conferred a distinct advantage because those moths were adapted to the blacked trees and much harder for hungry birds to spot. It was natural selection in action and became a famous example mentioned in many introductions to the subject. (The same shift occurred in the same species at about the same time in the United States, particularly around pollution-blackened Pittsburgh. But most of the research in the new study took place in Britain.)

The industrial revolution changed the world such that a camouflaged species was exposed and picked off as if in a spotlight.

The same factories that created an ecological dystopia were welcomed also for their efficient new model of how workers should be treated for the greatest economic benefit to accrue to the owners. Hooray and jolly good. I could go on about the enormous impact this had on everyone, but I’m writing about a very small section of everyone. The short version is that workers drained from the farms and home-based craft industries and they marched into the “dark satanic mills”. The life of these workers previously had an organic schedule of duties tied to the seasons and the sense of time present in small villages. This was the last moment of fathers living daily among their families. The new schedule was regimented, deadline-based, unyielding, and thoroughly scrutinized by the suspicious masters of this new world.

This improvement in ruining the happiness of average people was such a success that societal reformers adapted it to prisons and schools. I have to admit there are aspects of this that probably improved schools notably even as they made it an ordeal of top-down boredom hitherto unknown. Known as “The factory model” of schools, we live with the essentials of the system today.

This regimentation was the “soot-blackened landscape” against which neuro-atypicals stood starkly out like little white moths.

ADHD was first mentioned in 1902. The British pediatrician Sir George Still described “an abnormal defect of moral control in children.” He found that some affected children could not control their behavior the way a typical child would, but they were still intelligent. People with ADHD were, at last, visible, as their inability to handle regimentation and deadlines brought them to the attention of angry teachers and shop stewards. People with this neurology had existed forever but were little noticed in a world of loose timekeeping and random scrutiny. In fact, it isn’t so much that ADHD was discovered at this moment, as that the PROBLEM of ADHD was created simultaneously with those dark satanic mills. It’s worth remembering that the “problems of ADHD”  amount to criticizing the foot for not fitting the shoe or the canary for failing to thrive in the coal mine. In fact, the neurodiverse were the new (largely ignored) behavioral canaries in the new “coal mines” of highly regimented work and school.

Let’s take a moment to feel for the many decades of children assigned the permanent role of good-for-nothing failure from this moment forward. ADHD people weren’t as lucky as the peppered moths that lived on the black trees outside the schools and factories. ADHD people failed in the new system, becoming the academic lower class as a result, their futures continuing the trajectory as they approached the exams that in England virtually decided your options and sorted you into up boxes and down boxes. No random mutation came forward, replacing these failures with happy successful children. If you follow the rest of my work you know I believe a range of neurological types are essential to human communities. There is a human neurological ecosystem that supports community health like a healthy gut microbiome in an individual.  ADHD doesn’t disappear despite the hardship it imposes on those who bear it because a novelty-seeking caste within humanity is a necessary thing. Along with irritating the bejesus out of everyone, ADHD people turn over the soil of the intellectual and cultural world around them. They oxygenate it.

Slowly across the 20th century, small changes to the description of type and treatment appeared, working toward a more compassionate understanding. To be clear though, as a man with ADHD and the father of a son with ADHD, the progress in understanding is shallow and the progress in treatment is merely a best practices approach that rarely helps more than a little bit. Please do not confuse a treatment plan for ADHD with successful treatment or even successful management. The culture continues to tell us to knuckle down and become organized, timely, and motivated like the other children.

All the drugs and therapy are to help us pass muster as acceptably effective employees in the regimented world.