The political debate in the United States has gradually developed a tacit consensus that if ordinary people try to advance their interests they are being self indulgent and childish. Yet advancing the interests of the wealthy and powerful, “the owners” as George Carlin put it, is sensible, mature and realistic. It isn’t surprising since untold millions have been spent to achieve this version of common sense.

Our government has become the agent of the owners against the people of the United States. We pay absurd prices for health care, internet access, etc., because the free market is suppressed by the owners conspiring against us. If our lives are spent struggling to work enough to stay afloat and to keep paying interest on our debt for school or home or medical care, if out our lives are diminished or even endangered it doesn’t matter a shred to the owners. We exist to pay them. That’s why we are here. We are payment units. It doesn’t matter if we are happy or healthy, we exist to maximize their profit.

The owners demand to be in charge of every area of our lives, to make each a service they own and allocate at minimum quality and cost for maximum profit. They want the roads and highways, they want our schools and postal service, they want the armed services and prisons. They own the non-governmental services of health care and insurance and communications and internet access and so much more. They want us to have nothing of our own, nothing independent of them. Nothing will be corrected by “Market forces”. The government is being used by the owners to suppress market forces for the elite.

Philosophically and strategically they are exact same genus and species as the Russian oligarchs. They would run America precisely as Putin runs Russia. They would be aristocrats, we would be the peasants.

It’s time for a radical idea: America exists for the well being of her people. Let me tell you something, we’re a thousand miles from socialism with that idea. This isn’t voting to give everyone a pony, this is voting for a free market that protects competition, that ENFORCES a free market. It’s time for a government that isn’t working against our happiness and well being. It’s time to radically lower the power of the rich to conspire against us. If the Democrats want to gain power again they should stop acting like the slightly more compassionate alternative to Republicans. They should fight like lions against the indentured servitude of the of the American people. They should start by speaking this truth: we don’t live in a free enterprise system and much of our government has been suborned by the super rich against the interests of the people. This stance isn’t anti-business, it’s anti-corruption. It’s the only path toward something that  even resembles a free market. You wouldn’t even have to be especially left wing to take this position. This isn’t about giving handouts, this about ending handouts. It’s about ending oppression, it’s about ending rule by self interested tyrants. It’s the most truly AMERICAN god-damn thing we could do. 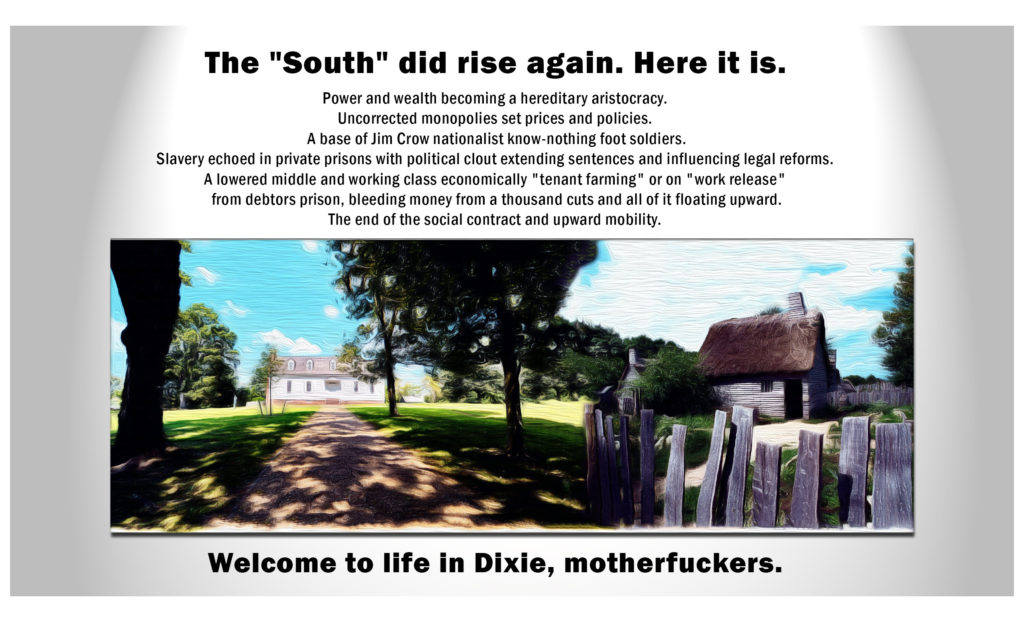