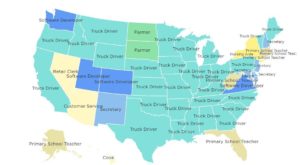 Now, look at this image of the most common jobs by state and consider the implications. I’m not against this change, but our political leaders still believe that wealth forms as magical dewdrops on the bodies of the 1% before cascading as a god-ordained blessing onto the far less important people down below.

We have no plan for the unavoidable, transformed near-term future. Worse yet, America has a cold, cold heart towards the poor and unemployed. Worse yet, unemployed lower-middle-class guys like these soon-to-be former truckers vote for pseudo-fascist idiots like Trump.

The problem with the rich is that they believe their own stories about where money comes from. When an unemployed American stops sending money to insurance, medical care, internet providers, etc, and stops buying nearly as many products of all kinds there is a tiny disturbance in the force for the 1%. Multiply that times all these truckers, and you have way less income for the rich. Where is your trickle-down now, assholes?