The Poor but Honest Princess 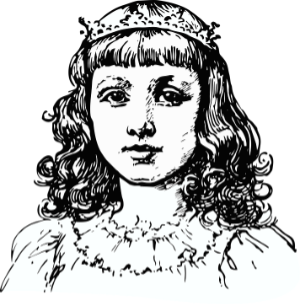 Once upon a time, in the cold forests of the north, a little girl was born, the only child of the royal family of a small, troubled kingdom. She was named Princess Laurel. The trouble concerned the girl’s parents, the King, and the Queen. Theirs was a loveless marriage, arranged and imposed over their angry protests. Though dutiful, neither felt well used by their own families. Their marriage was demanded to secure a peace settlement unifying the eternally warring adjacent duchies of Laurel’s grandparents. Once a unified kingdom, these clans had ripped it in two. From their armored castle compounds at opposite edges of the kingdom, they battled each other viciously for control, bringing misery and chaos to the peaceful population. The history of their feud was a ragged scar dominating the history of the kingdom. Heartless power grabs, Murders, and revenge murders filled the pages of that history. One day something snapped and a peasant revolution exploded into action, capturing both families and demanding change or death. Facing insurrection and obliteration by the common people, the families bowed to the inevitable.

The arranged marriage was acclaimed as the first step toward true peace and unity for the Kingdom. The essential next step would be their child, who would grow up to rule the kingdom and being related to both clans, could resolve their conflicts with the power of blood and rank; A living human bridge to peace.

That was the shining hope in the hearts of the men and women of the kingdom but that outcome was the last thing either the King or the Queen wished to see happen. The optimistic premise of peacemaking wasn’t accepted by either aristocratic family, they merely sought their own advantage in any circumstances and would make the most of this that they could. They viewed the marriage as a duel for supremacy, with the king and queen as the tips of their respective blades. For now, though they must be patient. The peasants weren’t complete fools and held high ranking hostages for security.

It might seem strange that this King and Queen had managed to have a child at all in these conditions. Of course, it was very strange, and awkward, and stressful for all concerned. As they set about conceiving their child, both acted as though sincerely committed to the official goal. Locked in each other’s arms, each one thought the other agreeably simple and gullible. Each was the last torchbearer and champion of their aggressive, entitled lineage, and both were playing at parlay and concord for now. Both viewed their child, soon to be, as the ultimate weapon of their endgame against the other.

The citizens of the newly reunified kingdom say that the war didn’t end with that marriage as much as to shrink to the dimensions of the newly reconstructed castle and possibly even down to the persons of the King and Queen themselves. The King and Queen lived at opposite ends of this castle, which had been ripped apart inside and rebuilt as two wholly separate seats of royal power, each with its own colors, pomp, and symbols. Each had their own court with nobles, advisors, ministers, elite guards, minstrels, and magicians. All these swore fealty first to the Monarch of their court and then to the unified Kingdom as a bit of an afterthought. When there was business to conduct, the two courts communicated in a rather arch mockery of courtly manners that subtly dripped sarcasm while implying deep distrust. Everyone had drifted into this unpleasantness by taking a cue from the King and Queen during their tense meetings.

For centuries the warring families had made alliances with many sources of dark, old magic among the Fey, the Pixies, the Goblins, and the ancient witch covens that lived in permanent shadows where the forest grew as tangled and solid as a stone wall. Representatives of these and more besides resided in the guise of well-spoken gentlefolk among the courts of the king and queen. Here they spent half their time designing and targeting curses and the other half warding curses away.

In the months leading to the conception of Princess Laurel, the scorched-iron scent of powerful magic never left the castle, and every kind of spell crafter regularly visited the two courts. Most of these spells were focused on turning the child into a mighty, but tightly controlled agent bent on the triumph of one family and the destruction of the other. Powerful opposing spells hissed and crackled as they met in the air around the queen. In the villages, the ordinary folk made charms, bindings, and blessings, to secure their dream of peace.

In the center of the bisected castle, exactly between the respective courts of the King and Queen, were the nursery apartments prepared for Princess Laurel: They were incongruously cozy, pastel, and sweet in this stone castle clothed in hard clan colors. On either end of her quarters was a heavy iron gate, one leading to the Queen’s side and one to the King’s. Every morning both gates were noisily raised and locked open, allowing movement to and from the other side. This clanking became the morning wake-up sound for Laurel, and she would often fall asleep shortly after the last thump and clank of the re-lowered gates at night.

The arrival of the princess radically changed the lives of the king and queen, as well as their relatives and courtiers. Also, of their assassins, spell-binders and curse-compounders. The abundant time mother and baby spent together seemed an alarming new vulnerability to the King; anything might be going on behind his back. Intense negotiations followed to arrange the baby’s schedule and her company.  The king and queen each demanded to be present when the other spent time with Laurel. When they left, various Aunts, Uncles, nursemaids, and nannies, etc. from both courts attended her in pairs of equal rank. These pairs would sit with her like two thieves, each guarding a precious gem against the other. Every person attending Laurel was (also) a spy for the king or the queen and their first duty when their shift ended was debriefing with their spymaster to describe in great detail all that transpired around the naps, feedings, and diapers. Maintaining high-quality childcare demanded reallocating resources and lead to a massive slowdown in evil planning.

So Laurel did not lack for company or attention. As she grew and became more social and sensitive to adult moods, her parents realized they must behave lovingly not just to Laurel, but towards each other, because Laurel grew worried and cried when they argued. Laurel, as the linchpin of two separate plans for conquest, had been seen as a pawn in both, little more than a useful tool. But gradually the king and queen understood that if their daughter didn’t genuinely love and trust them completely their plans might miscarry. A pawn only works if it moves as ordered. Though neither monarch was especially nice, both were very clever and quick adapting to challenges. And so it happened that Princess Laurel had wonderful parents, and was surrounded by cheerful nannies and doting guards in such a beautiful facsimile of a happy childhood that she didn’t notice anything wrong for years.

The King and Queen felt trapped in a paralyzing dream. Each day they spent hours in proximity to each other yet not together.  They cooperated while spending time with their daughter, bouncing her on their knees, playing her little games, and listening to her ridiculous, beautifully innocent stories. They each struggled with illicit tender and vulnerable feelings. More than once they’d exchanged a look over some sweet thing Laurel did and that intimacy sent a shudder through the ice between them. The bloody obligation they had shouldered so lightly at the start of this was heavy now and weighed more every day. Each suffered terrible moments, imagining the start of the hostilities and the awful, terrifying, things Laurel would witness that day… people she adored dead and dying everywhere in the castle. They foresaw her horror and shock… they knew what it would do inside her. At these moments they felt doomed, paused a moment away from destroying something beautiful, and betraying family no matter what they did. If they hesitated too long the other family would overrun them all and triumph. Starting the battle would break their daughter’s heart, and plunge her into soul darkness. She might never love or trust again, which would be near murder in its own way. If they refused to act all, their families would revile and disown them, followed probably, by something even worse. Meanwhile, their families badgered them for news of their plans and the king and queen begged them to be patient, saying the situation wasn’t ripe for action yet.

Six such years passed and Laurel was now eight. All the while, the courtiers, servants, and soldiers lived out an exhausting daily display of apparent warmth and brotherhood layered over the violent dislike they must express among their own to show loyalty to their ruler. Walking a few feet in either direction compelled them to switch their apparent allegiance instantly and shift from one version of what you must and must not say, to its opposite. Though nobody wanted to admit it or dared to say it, you can’t share good meals and drink, and raise toasts and laugh and sing together with people for very long without at least diminishing your readiness to murder them. You can’t help noticing likable things about people who act …likable and the longer you pretend to like someone, the harder it becomes to hold the opposite in your heart. This ambivalence didn’t soften the hearts of the evil wizards, professional assassins, or the high ranking of the two families, but by now, nearly everyone else felt muddled and torn, their loyalties divided enough to doubt themselves. As the hard lines blurred, they began to feel like shameful traitors all the time, everywhere they went, with everyone they met.

Before long, Princess Laurel was the only one in the castle sleeping peacefully through the night.