This is the composition of the American population grouped by important neurological, sexual, and political “realities”. These people are active ingredients in their standard amounts in the recipe that produces human communities. This is a recipe (or at least a list of ingredients and amounts) for reality as we know it. You can not leave out or thoughtlessly replace any ingredient is a standard recipe and have success. We can think about any food recipe and with only our common sense, understand why that ingredient was essential and why its absence ruined the result.

Look at this with that simile in mind. 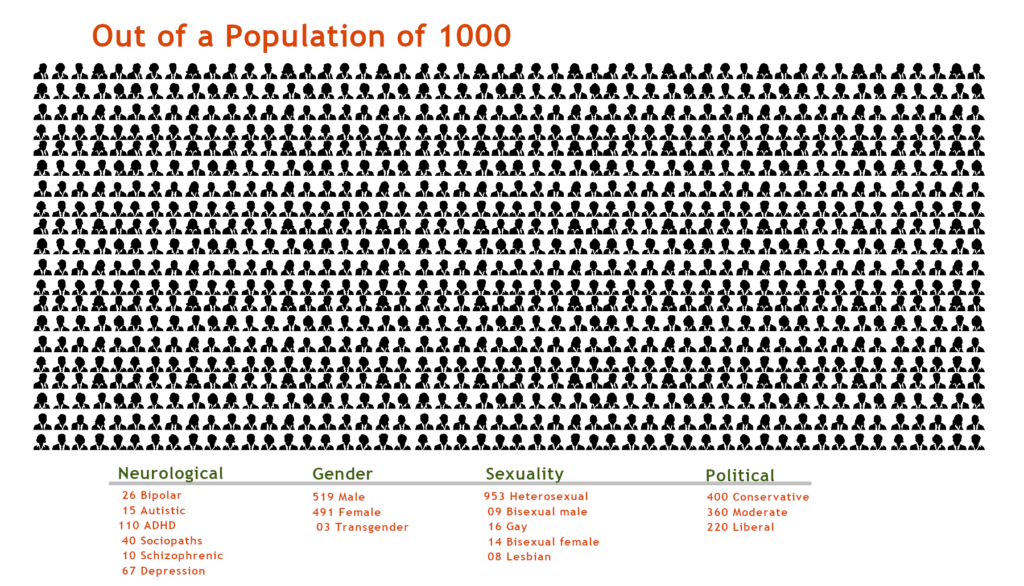 Each variation is a distinct frequency of reality and behavior. Each frequency affects those around it. When all these measured types are present at once we have a larger meta-frequency generated from this synthesis. The harmony of the choir when each singer is hitting their note.

This aggregate of differences is the blueprint for a human community. These percentages are unchanging, year after year. This is the consistency of us as a collective generated by the soulful, longing, hard slogging individual lives we lead. There are a lot of roles being played here that support community health and success. This is the diversity of a healthy biome. The tent could collapse if the percentages wandered far enough out of balance. Too much or too little could cause problems comparable to a pudding that won’t set or is too thin or thick. An imbalance could mirror a PH imbalance that stops the bread from rising.

Remember that these proportions are annually reliable, a given.

The scientific paradigm behind evolutionary biology would say these predictable numbers are just random results of random events that are only consistent because the process that creates them runs the same way, year after year: Imagine measuring the average amount of grain spilled when loading a silo, the amount will be roughly consistent as long as you do it the same way each time. There’s an inherent bias hidden in this thinking that needs to be outed. Everything type of person listed under Neurology above is considered a broken human being, damaged in production, human factory seconds. They are broken because they don’t display behaviors within the same tolerances as the majority.

Transgender, Gay, and Lesbian have likewise been treated as nature’s little goofs forever. “Oh, I’m sorry it’s gay, but they are almost as good as a normal child.” Broken in a Gay way, Broken in an Autistic way. Remember its commonplace that women have been judged broken in a Female way. Our assumption is that nature is kind of clumsy and sloppy at its job. These people are handling errors and breakage, random failures. Nature is clearly failing to create the correct kind of human beings, the ones we should all be…that’s the bias. Rather than seeing that consistent patterns in nature and species indicate demonstrated survival value, conserved and repeated through generations. This blindspot is a distortion generated by looking at human life solely through the lens of biased, preset human attitudes.

The part of us that rushes to aid the comfortable, that sees virtue in the beautiful, and recoils from the unfamiliar; The herd primate part of us measures the value of people in a way that is tacitly shared with all of their sibling herd primates because they are reading from the same script. This script is about acceptance, position, and power. We run toward the lucky and in terror away from the unlucky, we kiss the overhead asses and struggle to maintain our position above those below. Showing contempt for those below helps to keep them down there.  This primate script doesn’t rise above the local “politics” of who gets what they want and who doesn’t.

Those assumptions I mentioned in the scientific paradigm grow directly from this scripted background. Keep hold of that idea, please till we’re a few paragraphs further down.

In fairness, bipolar or autistic people are diagnosed in the first place because of failure to thrive in society. Even the words Bipolar and Autistic reveal improvements in perception and compassion, those words were insane and stupid not long ago. Naturally, the therapeutic community focuses on deficits and lack of function, that’s their relationship to the clients. And when ASD or ADHD  people say they reject thinking of themselves as sick or broken and want to self define as valuable FOR their otherness, not in spite of it, therapists mumble about “understanding the impulse but we should be realistic about the severity of problems”, etc, etc. Caregivers will ask “How can these serious problems that cause so much suffering, be understood as normal? They are of equal value to normal lives but they are obviously not normal lives. The client has an objectively difficult life, and that is a limited life, less than normal. Because the therapeutic community “discovers” and announces the existence of neurodiverse types and because caregivers are tasked with them providing aid, they are seen almost as keepers, responsible for and in charge of this class of humans. Society looks to them to define those they care for. That’s another massive bias buried among the assumed good intentions of research and therapy. The alleviation of suffering is entirely good but the definition of pathology as its degree of variance from the statistics of the majority is tainted by the fact that most of the sufferings of the neurodiverse come via rejection by that statistical majority.

Neuro-diverse people are resisting the collar and insisting on a say in any discussion about them. Why are we judged to be damaged goods simply because we’re different than the most common thing around? By that standard, the cheese in a sandwich is failed bread and cream is inadequate coffee. The answer, of course, is that the majority defines success by agreeing on what is successful. It defines as healthy what seems to it, as healthy.

A moment ago I asked you to remember that the assumptions in the scientific paradigm grow directly from the automatic, scripted social behaviors of our primate marching orders. There’s a script inside every baby that will guide and circumscribe their behavior over a lifetime with no alternative offered. Every time they follow this script they feel free to chose differently, there is no feeling of being compelled but any choice you can make is a presented choice. People are so predictably people because of exactly this scripting.

That primate social script is small, simple, and cached within a massive, complex script that runs the many, many things we don’t know about ourselves, yet are true.

One answer revealed in this meta script is that neurodiverse people are essential and important on a different level of reality than those valued in the primate social script. It is what they do, rather than how well they fit in that matters. At the “individual peep struggling through this world” level, the neuro-diverse often experience great difficulty and scant happiness, but that’s not of any importance at the level of the community organism, the meta-being made of many people that structurally requires special structural castes of human beings, in specific amounts, shaping the community with their behavior. Neurodiverse people exist simultaneously as a successful, essential ingredient of the community organism and as a (probably) unsuccessful misfit in the eyes of their local, social community. Our species is operationally complex and subtle beyond our ken. We blindly cooperate to build cultural machines and structures whose purpose we can’t grasp. We participate diligently in ways we don’t perceive… achieving ends we do not understand, just as we are supposed to.

What are these special castes and behaviors? At least, These:

From our population of 1000, this is a group of 268 people. That leaves 732 “normal” people conducting the majority of human business and defining its value. These social, predictable people, or rather, their social, predictable behavior, is humanity’s cautious, baby loving, rule-following, guilting, and shaming survival script. This is the behavioral homeostasis of stability.

Neurological Normal people are not the people we weirdos should have been or “failed to become”, they are a specific behavioral configuration of people generated in proportions dictated by the recipe. Normal isn’t what we are all really supposed to be, it’s a set of stabilizing majority behaviors whose pro-social effects ensure ongoing survival. Normal is the low and heavy center of gravity that keeps society, like a clown-bop-punch bag, returning to an upright position. One of the main jobs of the “Normal Caste” is policing adherence to the rules of normal. This isn’t because they’re jerks, it’s their job to maintain stability mostly by frowning at stuff and being disappointed in people. A wet blanket is useful for holding things in place.

The percentages of male and female are effectively 50/50. These both have a common core of behaviors thought of as MALE or FEMALE, the manly man and the girly girl, but also a bell curve of flexibility allowing men and women to exist, completely healthy, but not in the stereotyped ways of the core behavior. Nature is maximizing chances for reproduction with these even percentages but it is also choosing an even balance of all the things men and women CAN be. Male and Female stereotypical behaviors are so abundant because they successfully produce the next generation age after age. Nature includes the bell curve of freedom (or at least variation) though because nature knows things. Nature knows things change and shift, she knows you have to be flexible and ready to pivot if an ecological disaster or a cultural earthquake changes the rules for everyone some Tuesday afternoon around 4 pm.

95% heterosexuality is completely in keeping with the observed pattern of maximizing baby production. But nature is also steadfast about maintaining 5% of the population who without special arrangements, are not here to make babies. This is another of those nuances in the recipe which, like neurodiversity, is an essential ingredient. Since culture and behavior is the life lived or the “body in motion” of our meta-organism, we must assume that the role of LGBT people is an essential moderating element. This is true whether it’s simply good for survival to have non-breeders among breeders or something more elegant like natural subcultures growing strains of new ideas, arts, and philosophy. They may even play a part as a mild counterbalance agasinst overly static normal conditions.

Notice the symmetry between this balance and the ratios of neurotypical to neurodiverse. Society’s weight is on its back foot, resisting change, but the population includes groups that are passionate about reform and others conditionally open to it. Look at my articles on “Tension force” if you want to hear my angle on the mission-critical equilibrium of dislike between progressive and conservative. Likewise, check out “Neophobia vs Neophyllia” for a look at the evolutionary roots of this same issue across all species. How deep is our commitment to past patterns? How ready are we to change? How able?

The “Community Organism” is the self-managing, dynamic, colony-being that emerges from our collective individual behavior. We are to the community organism as cells are to animal bodies.

Posted in Human:Nature, The Community Organism