the night he was shot. 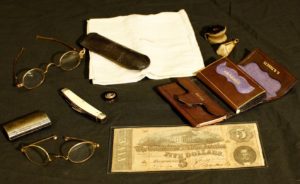 When Abraham Lincoln was shot at Ford’s Theatre in Washington, D.C. on April 14, 1865, he was carrying

Given to his son Robert Todd upon Lincoln’s death, these everyday items, which through association with tragedy had become like relics, were kept in the Lincoln family for more than seventy years. Now in the Library of Congress.