To the right is a relationship flowchart by the elegant artists and thinkers of Information is Beautiful. They have a lot of fun and interesting stuff to explore. The image is linked to a full-size version, it may take 2 clicks to open it fully.

All these forms of intimate relationships are going on around us right now. Some are movements and subcultures, some are just deeply personal rabbit holes. Many are virtually invisible through fear of disapproval. Polyamourous people are probably as low profile now as gays and lesbians were in the late sixties. 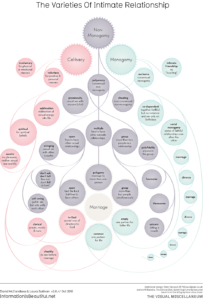 These varieties can be understood as a range of human love styles but also as strategic experiments running parallel to the accepted norms. The norms are pretty obviously the mating styles that do the best job of creating robust and stable populations. That has clear evolutionary significance and suggests a reason for cultural pressure to stay inside the lines. Yet these variations show up within every generation of people. Perhaps life maximizes chances for success by keeping alternate pathways running should fortune suddenly favor them. Since these variants are visible as an emergent, bottom-up effect from the desires and needs of individual people, we can predict them appearing in some ratio within any population, in any circumstances, anywhere on earth. If we imagine small tribes in many different challenging conditions attempting to survive, it’s easy to see how one of these variations might prove more advantageous than straight up monogamy. That makes it evolutionary common sense to preserve these alternate strategies inside the human heart.

Different strategies can become the social norm in different cultures, and be seen as the ideal, natural version of love and marriage. Monogamy is the widest spread, most successful pattern historically but the fact that it isn’t universal and is seen as less than ideal in various other cultures has an important implication. It means that the cultural machinery doesn’t come with a preset mating strategy installed but adopts whichever mating pattern becomes dominant and reinforces it. Apparently, the larger survival value is in a culture-wide agreement about our common strategy. A culture without a dominant strategy is not a fully defined culture.

It’s intriguing that in America the variations in the chart are all legal to pursue…as hobbies. But illegal as forms of marriage. Gays and lesbians have finally been recognized as normal citizens with a right to marry, but only within the one, true marriage pattern. This shows the intense cultural defense of the dominant strategy. There’s a fear of society losing definition and becoming nonfunctional without a law of marriage. Polygamy (multiple wives) and polyandry (multiple husbands) are illegal here along with group marriage. But as long as you don’t try to stick a ring on it, the law isn’t coming after you. That’s a job for your fellow citizens, creeped out by your weird arrangement which looks to them like the marriage equivalent of a person with three arms and seven eyes.

However, Polygamy is legal in 58 out of nearly 200 sovereign states, the vast majority of them being Muslim-majority countries situated in Africa and Asia. In most of these states, polygyny is allowed and legally sanctioned. Polyandry is illegal in virtually every state in the world. Polygamy is less common than monogamy, but apparently closer to some core of possible human lifestyles than is polyandry. In theory, it’s possible to imagine a woman with multiple husbands, in practice it would seem to require a different type of male than I am familiar with.

Monogamy famously chafes on the human race in various ways, and in less enlighted times and places, it has been a raw deal for women. But it seems to support reforms and human rights better than any other strategy. It’s a dicey thing to bash other cultures, but Polygamy, mainly a Muslim strategy has serious toxic effects on the cultures that embrace it. Yet as the dominant pattern, it’s very difficult to displace, especially when it favors the rich and powerful men who have more say politically.

Here are some important points from research on the effects of Polygamy :

Posted in Human:Nature, Society, The Talk