This test is the most commonly accepted accurate measure of basic personality. These metrics are used in countless psychological studies. In some of my writing, I need to refer to the Big 5 and wanted an easily found reference.

Many researchers believe that there are five core personality traits. 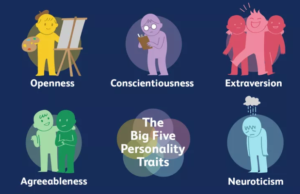 These “big five” are broad categories of personality traits. The test results show you as low or high in each area. Your basic personality type can be understood as the mix of all these traits at the high or low levels measured in the test.

These five categories are usually described as follows:

Openness (sometimes called intellect, imagination)
This trait features characteristics such as imagination and insight. People who are high in this trait also tend to have a broad range of interests. They are curious about the world and other people and eager to learn new things and enjoy new experiences.

People who are high in this trait tend to be more adventurous and creative. People low in this trait are often much more traditional and may struggle with abstract thinking.

Conscientiousness
Standard features of this dimension include high levels of thoughtfulness, good impulse control, and goal-directed behaviors. Highly conscientious people tend to be organized and mindful of details. They plan ahead, think about how their behavior affects others, and are mindful of deadlines.

Extraversion
Extraversion (or extroversion) is characterized by excitability, sociability, talkativeness, assertiveness, and high amounts of emotional expressiveness. People who are high in extraversion are outgoing and tend to gain energy in social situations. Being around other people helps them feel energized and excited.

People who are low in extraversion (or introverted) tend to be more reserved and have to expend energy in social settings. Social events can feel draining and introverts often require a period of solitude and quiet in order to “recharge.”

Agreeableness
This personality dimension includes attributes such as trust, altruism, kindness, affection, and other prosocial behaviors. People who are high in agreeableness tend to be more cooperative while those low in this trait tend to be more competitive and sometimes even manipulative.