The Dreamtime of the Paleolithic.

“It darkles, (tinct, tint) all this our funnaminal world.” ― James Joyce, Finnegans Wake

In 1994 three researchers wandered the Ardèche valley in southern France beside the river of the same name. Their work would look odd and delicate to us. They were hoping to discover hidden caves and their method was to feel for small drafts of air rising through piles of rock. Some explorers do this by literally sniffing about, hoping to scent the smell of a cave. That day, these three discovered a near miracle. It was a huge cave full of ancient human art perfectly sealed by a landslide for around 20 thousand years. This is the Chauvet cave, named for the lead explorer.

Abundant charcoal on the site allowed good carbon dating. The primary use of the cave by humans dated from 32 thousand years ago. This placed the art at 10 thousand years older than the oldest art we knew of. I want to write that age as a number.

32,000 years ago. 30,000 BCE. This time is the upper paleolithic or “old stone age”. Something strange happened in the neolithic. About 9000 years ago an emergent rush of lifestyle change transformed humanity from small tribes of wandering hunters to villages of farmers. As a group, we abandoned what we had always done for something new.

The long paleolithic period in southern Europe leaves little to tell us who we were, but what we do find is vivid and strange. The paintings in the Chauvet cave are amazing. Like most cave paintings they are of animals rendered with smooth confident lines and subtle shading. What isn’t so obvious is what the paintings meant to the artists. When it was in use, Chauvet cave had a large opening that would have allowed sunlight into the first chamber. There are no paintings in the first chamber. Well, only one… just at the point the sunlight could not reach.

Paintings are for darkness.

The painters used all the features of the cave as part of the art. A horse appears to be running out of an alcove. Bumpy cave walls become 3d anatomy; a bison shoulder, a lion’s hip. Looked at from different angles things transform and shift identity. This part of a horse turns into that part of a wolf. Some animals might be a group standing together, or a single animal moving through space as if we paused an animation with multiple frames visible at once.

The world surrounding this canvas is worth considering. Europe was in an ice age, there were glaciers 9000 feet thick. It was cold but dry and sunny. The people would have dressed as traditional Inuit Indians do, with reindeer leather and furs. They carved bone flutes on the pentatonic scale. The sea level was 3oo feet lower and a determined hunter could have walked from Paris to London (or you know, those geographical locations).  The world was crammed with animals familiar and strange: Cave bears, lions, hyenas, mammoths, hairy rhinoceros, horses, bison, leopards, wolves, ibex, reindeer. In the same area lived a distinctly separate species of humanity; Neanderthals. Neanderthals left no paintings. Why did we paint and why didn’t neanderthals paint?

Humans didn’t live in the cave. They went down into the dark with their torches to conduct some kind of passionate business they had with this wild world they lived in.

There were ideas which informed their lives. The venus figurines of paleolithic Europe show remarkable consistency over 30,000 years. Exaggerated female sexual characteristics, especially the vulva which in many cases is the largest part of the figure. This image hangs over the paleolith as an icon. Talk about objectifying…the figures usually have a simple thickened extension for a head that might have allowed it to be worn around the neck. It’s a meme and so far, the most successful one ever made by humanity. So “Woman” is shown but not particular women. Many have speculated that it is a fertility symbol and others that it’s about beauty. Whatever we guess we will never get an answer. I think it’s about both. I think it’s about sex and survival. We were thin on the ground in those days and by no means bossing all the flora and fauna around.  If you think about it, A pregnant woman is sacred to us today. How much more would we care for them with wolves, lions, and hyenas for Christ Sake growling at the door you haven’t invented yet? Sex was survival, as it is today but our lives then were exposed to danger every minute. We have become so successful that many humans feel a bit detached about having kids. However, feeling detached about having kids is not a hereditary trait. Get it?

Men are much more rarely portrayed and when men are shown they are animal men. Minotaur men, lion men. They are transformed, or perhaps half-untransformed. Maybe, these figures show us transforming into modern men and women. Maybe they show us in a long, restless, cocooned dream as we approach a point of transformation. There is only one painting in the cave of humans. It is the very last painting at the bottom of the cave; the farthest in the furthest down. It contains a man and a woman but neither is complete. They are flowing out the hip of a lioness, the woman is the lower half of the Venus figurines, the man has a bison head (with a very curious expression) and is looking at her, possibly holding her. Both of them yearning and telling us that they yearned, from deep inside the dream.

I believe painting is wrestling with the dream. Art is what you do with the dream when you suspect that it doesn’t equal reality: Who are you really? What is happening here? Art is a kind of “low purity” scientific method applied to the funhouse mirrors of inner experience. Other animals probably don’t ever have the feeling that it is weird being this kind of animal. Humans can wonder if consciousness is a dream overlaying their own unconscious but more real survival program and they can just as easily wonder if the survival program is the dream, only visible from the high ground of consciousness.  You can only grapple with the dream from outside it (or possibly from the doorway between). There must be a NOT-DREAM for us to recognize DREAM. I think this grappling is painted on these dark walls. Remember, they didn’t live down here, they came to explore whatever it was that made them paint.

I think it is possible that Neanderthals didn’t experience this critical tiny difference of foreground and background consciousness or simply lacked our strange compulsion to communicate it. That lack might have long term consequences. Obviously, I could be wrong.

An ALSO explanation of painting or a possible INSTEAD explanation is that painting is the voice of the MEME. Perhaps painting is part of the community cultural pheromone, anchoring meaning, and self through visual speech. Binding meaning across time is how we cohere, maintain, and grow as communities. Sharing those memes is essential for the community. It’s natural that our ancestors who did this finally emerged as the Neolithic revolutionaries while parallel human species who lacked this “binding agent” did not. The virality of the farming community idea transformed us in an eyeblink, roughly yanking us up from our animal dreams. 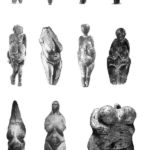 The most successful meme ever. Recognizably the same for over 30 thousand years. 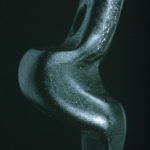 Among the last of the Venus figurines, 11 thousand years ago. She has practically become a letter, admittedly a rather sexy one. 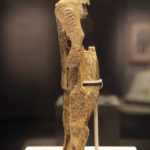 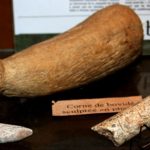 And of course, paleolithic dick pics. If erection lasts more that 40,000 years, consult your shaman. 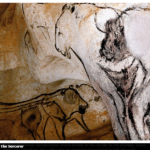 The lioness and her hip 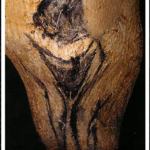 from which we arise 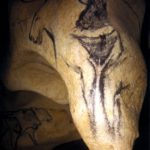