I was a Cyborg Caveman

We pan in to see an early stone age man.
This is a fantasy to properly set the stage so please indulge me.  Imagine this early stone age man with no clothes or tools. It’s as if he just popped into existence this minute with nothing but teeth and strength and a brain. Like a “for reals” version of “Survivor Man”. He is living much like a bear or any other animals smart enough to scratch together a living and come in out of the rain. But he has no tools to help him cope.
This IS a fantasy because animals like monkeys and crows routinely use simple tools to access food. This means that they are thinking beyond beaks and fingers, that they can visualize an external means of extending their grasp or strength. I expect people have been automatically reaching out for sticks to knock down the high fruit as long as they’ve been here. But this guy is just a way of picturing the human predicament in the raw. It’s cold and wet, it’s hard to catch food. Hell, it’s hard to do pretty much anything.

Several cavemen hunters standing on the crest of a hill dusted with snow. They are wearing treated skins carefully sewn with a bone needle and thread spun from flax fibers. Among them they have:
These late stone age men have become creatures that can resist rain and stand colder temperatures. They can walk over hard sharp stones without pain. They have  deadly stingers that can shoot meters away. They have another tool that makes them daunting.  They can say things to each other like “He’s behind that tree!” or “go down there and wait” or “Now!”. This language is closer to innate than his lance or clothes but is in a created code. The code contains invented nuances that are certainly honed and shaped to make them “sharper”.
If I described any two animals with such dramatic differences between them as our early and late cavemen, the only sensible guess would be that they are different species. Our “Modern Cavemen” have taken on things that nature never gave them directly. They have staked out the human pathway: To adopt technologies that change us in practical terms, into a different sort of species than any human group that doesn’t adopt it. Not only ARE we cyborgs, we always have been.
Most animals have a strategy for survival that is highly specific. Sort of like: “I can live in this climate with this kind of ground cover as long as there is this highly specific kind of beetle for me to eat.” The most vulnerable species on earth are those with the most specialized strategies. I mean really, koalas, eucalyptus leaves? Clever scavengers tend to do pretty well but what if there was a species who didn’t have strategy for survival, but a meta-strategy? “Give me an environment. I’ll figure it out. I will make shit up out of nothing in order to get along here and become the apex predator. Ultimately, if this place doesn’t have the kind of food I like, I’ll start breeding the plants and animals until I do.” The humans use their meta strategy to create local specific strategies which they will often times abandon when they figure out something they like better. It’s as if they are willing to act like a local species for a while but they’ve got places to go.
All it took for Darwin’s finches to be considered 13 different species was differently specialized beaks. 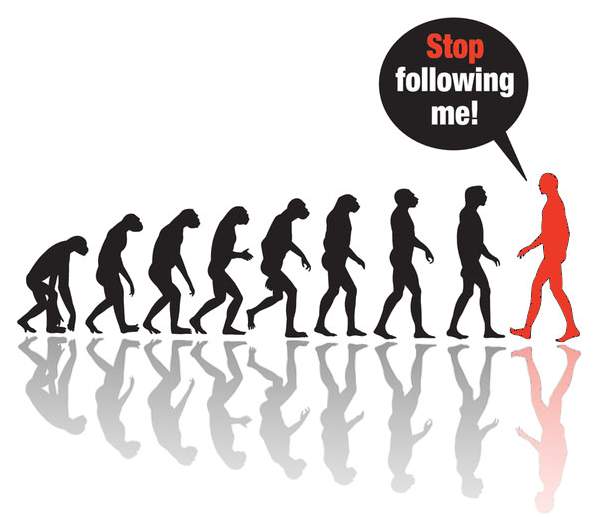 Human beings have lived on earth:

It would take some doing, but in one really long hard day you could probably visit parallel cultures today.

Virtual Species
Technology is both virtual evolution and  virtual speciation for human beings.
If most animals adapted by say, growing a larger claw or becoming better climbers that wouldn’t be something they did until they had a better idea. It would simply be what they are until going extinct or adapting again over eons. Every Time humans embrace a new threshold technology they change their jobs, rules, morals and mores. And every time they hit a new threshold technology, they drop those like they were hot and pick up others.
Mostly. But there are always those that stay behind. There are uncontacted tribes in the world today. Not many, but they exist, living pretty much the original human lifestyle using the original human technology. And all the other earlier stages are there too, scattered around the earth.
It’s pretty clear that the deep cultural beliefs are the slowest things to change. Look at the roles Islam and Christianity are playing in the world today. They are all over modern politics like white on rice. But their tone is different…there’s a little desperation to remain valid and in charge as the changes technology makes in us create new freedoms.
I think this continued existence of our old tech societies is absolutely fascinating. I think it also demonstrates the power and sophistication of the human meta-survival strategy. Not only does it push us forward, changing OURSELVES with technology but it leaves islands of earlier strategies as…a fall back position? This may sound a little mystical but I don’t mean it that way. There is a genius in nature that doesn’t require our style of inner narrative consciousness. Forests share food, for crying out loud!
I have a lot more to say about these issues in coming posts.