Cribsheet: Telling stories in my sleep

I have to say I am proud of my storytelling self. I can extemporize a kid’s story that takes off, goes somewhere cool and lands on time. Some of my favorites: The Sunflower Seed Six about a bunch of jazz playing mice and their adventures.The Poo Poo Pirate Ship about well…um…just imagine. He came up with the name and idea. “The Bloops”, a race of round yellow aliens whose sun burns out so they go to the intergalactic hardware store to get another. These days because he loves 101 Dalmatians so much, he has me tell him stories about the Sunflower Seed Six saving the puppies from Cruella DeVil in a such a variety of places that I am now hard pressed to think of a single new location. We have saved puppies in the mountains, under the sea, in the desert, in deep underground bunkers, even on the moon! I’m sparing you the 15 or so others.Once in awhile when I’m telling stories I am so tired that I just start to drift off. What’s bizarre is that I continue to talk. The narrative thread gets a little shaky at these times however. Isaac will say “What?!” or I’ll sort of snap to attention and realize I’m doing the storytelling equivalent of driving off the road. It’s really weird.

Guilt Trip
Isaac is almost 5. It’s amazing. He was a baby just a minute ago. You’ve heard everyone else say such things, now it’s my turn. He is sort of tall and thin. His attitude is grumpy and sweet and playful and manipulative. I cannot believe the guilt inducing things he pulls on me at times. The other day he whacked me with a sword (small, plastic) and I read him the riot act about doing such things. He sobbed: “I thought my Daddy LOVED ME!”. I have never in my life voiced anything like this to him and I doubt his Mom has either (though I snarkily think it sounds more like her) . I think he came up with this entirely on his own. More and more I think people just are what they are from the very beginning and our stories about how “This happened and it changed me” are just fancy ways of rationalizing our peculiar and frustrating natures. He is sort of too clever in some ways. He forgets nothing, asks test questions to check my memory – makes up alternate words and answers with them waiting for me to translate. we read chapter books at bedtime and he loves them and lives very deeply in stories. 101 Dalmatians is a very big story for him. He is still challenged by large motor skill stuff (from his preemie days) and I can see him working these limits into how he does things and how he defines himself. I am doing what I can but I don’t know how much I can do. I get him out kicking the soccer ball – climbing hills – wrestling. He was sort of delicate about anything happening to him – one of those kids who says “ow” more often than they really should. I bought us some of those big foam “Noodles” the swimming flotation toys – and we whack each other over the head with them all time, we joust and quarterstaff with them and I am proud to say that my son can now be whacked in the head without becoming whiny and upset.

Well anyway, I just wanted to reach out to those of you I care about and hardly ever talk to, just to catch up a little. I guess I’ll finish with a lovely thing that happened with Isaac a couple of weeks ago. We had had a great day together and I told him that his Mom was coming to get him in a couple of hours. He said “Can I keep this day?” I said “I guess you can keep any day that you remember.”He said, “I keep all my days with you.” 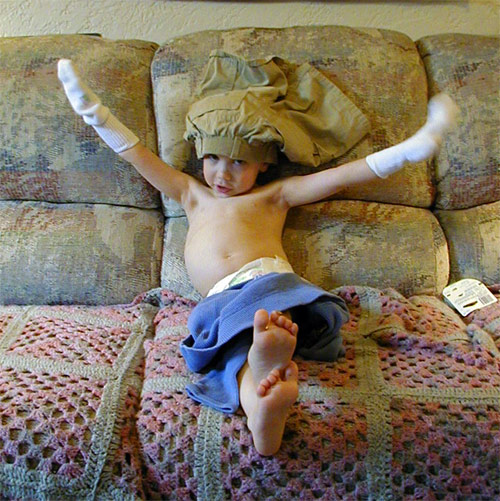