The Universe and Everything

When I’m not writing obsessive pseudoscience I may well be dreaming on screen. Not a single one of these is new, but I felt like gathering them together to talk amongst themselves.

Load order is random to alter the story every time.

Posted in Art, Self, The Universe and Everything

Carl Sagan can still bring tears to my eyes.

Posted in Future, The Universe and Everything, Videos

A Map of the Territory

Unlikely as it seems, almost everything I’ve been writing about here fits together in a big puzzle.

I want to connect the dots for anyone determined enough to follow it in case I get hit by a bus because I have been considering that option lately. 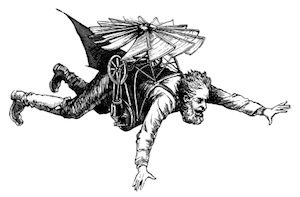 I’ve built a hierarchical map that describes (most of) the structure. It is a work in progress always and forever. I am attempting to link up parts of the map to related articles but that’s  a lot of work, buddy. I’ve made it a page rather than a post so it doesn’t retreat into the distance, never to be seen again. This is probably more work than you are in the market for, loyal reader (and I do mean singular) and I present it with that disclaimer. It’s basically a big damn complicated flow chart.

Posted in The Universe and Everything

The universe next door

pity this busy monster, manunkind,
not. Progress is a comfortable disease:
your victim (death and life safely beyond)
plays with the bigness of his littleness
— electrons deify one razorblade
into a mountainrange; lenses extend
unwish through curving wherewhen till unwish
returns on its unself.
A world of made
is not a world of born — pity poor flesh
and trees, poor stars and stones, but never this
fine specimen of hypermagical
ultraomnipotence. We doctors know
a hopeless case if — listen: there’s a hell
of a good universe next door; let’s go

Posted in Poetry, The Universe and Everything

Off the coast of Thailand.

Posted in Amazing Nature, Perspective, The Universe and Everything, Videos

I love this, especially the fact that time passing looks like an intense wind blowing around him.

Posted in Just Interesting, Soulful stuff, The Universe and Everything, Videos

Ferrofluid is a liquid that becomes strongly magnetized in the presence of a magnetic field. A grinding process for ferrofluid was invented in 1963 by NASA’s Steve Papell as a liquid rocket fuel that could be drawn toward a pump inlet in a weightless environment by applying a magnetic field. Ferrofluids are colloidal liquids made of nanoscale ferromagnetic, or ferrimagnetic, particles suspended in a carrier fluid (usually an organic solvent or water). Each tiny particle is thoroughly coated with a surfactant to inhibit clumping.

When a paramagnetic fluid is subjected to a strong vertical magnetic field, the surface forms a regular pattern of peaks and valleys. This effect is known as the Rosensweig or normal-field instability. The instability is driven by the magnetic field; it can be explained by considering which shape of the fluid minimizes the total energy of the system.

From the point of view of magnetic energy, peaks and valleys are energetically favorable. In the corrugated configuration, the magnetic field is concentrated in the peaks; since the fluid is more easily magnetized than the air, this lowers the magnetic energy. In consequence, the spikes of fluid ride the field lines out into space until there is a balance of the forces involved.

At the same time, the formation of peaks and valleys is resisted by gravity and surface tension. It requires energy both to move fluid out of the valleys and up into the spikes and to increase the surface area of the fluid. In summary, the formation of the corrugations increases the surface free energy and the gravitational energy of the liquid but reduces the magnetic energy. The corrugations will only form above a critical magnetic field strength when the reduction in magnetic energy outweighs the increase in surface and gravitation energy terms.

Ferrofluids have an exceptionally high magnetic susceptibility and the critical magnetic field for the onset of the corrugations can be realized by a small bar magnet. – Wikipedia

Posted in Just Interesting, Science, The Universe and Everything, Videos

A ‘star drop’ refers to the patterns created when a drop, ﬂattened by some force, is excited into shape mode oscillations

Abstract: “These patterns are perhaps best understood as the two-dimensional analogs to the more common three-dimensional shape mode oscillations. In this ﬂuid dynamics video, an ultrasonic standing wave was used to levitate a liquid drop. The drop was then ﬂattened into a disk by increasing the ﬁeld strength. This ﬂattened drop was then excited to create star drop patterns by exciting the drop at its resonance frequency. Diﬀerent oscillatory modes were induced by y varying the drop radius, ﬂuid properties, and frequency at which the ﬁeld strength was modulated.”

Posted in Just Interesting, Perspective, Science, The Universe and Everything, Videos

Plenty of room at the bottom

These images were taken with a Scanning Electron microscope (SEM). The surface of a specimen is scanned by a beam of electrons that are reflected to form an image. Color is added later.

“Plenty of Room at the Bottom” is the title of an article written by the American genius, Richard Feynman in 1959. He worked on the Manhattan Project that delivered nuclear weapons to our military before the end of World War II. In the 1980s he was the scientist who figured out why the space shuttle Challenger exploded. In “Plenty of room at the bottom” he visualized the core ideas of Nanotechnology 2 or 3 decades before it became a widespread big idea.

“It is a staggeringly small world that is below. In the year 2000, when they look back at this age, they will wonder why it was not until the year 1960 that anybody began seriously to move in this direction.” Richard Feynman

We’re talking about a bustling industry where objects are measured in nanometers and micrometers.

In this video, we begin focused on a shrimp at a scale of 1 mm. We zoom down and in toward the top of the head where we see a microscopic sea plant, which eventually fills the screen. We close on a single bacteria, atop the seaweed zoomed from 1mm to 0.5um.

The remarkable chain drive below was built by the Department of Energy’s Sandia National Laboratories.  The distance between chain link centers is 50 microns. The diameter of a human hair is approximately 70 microns. This is one example of thousands of separate projects and experiments laying the foundation of Nanotechnology. 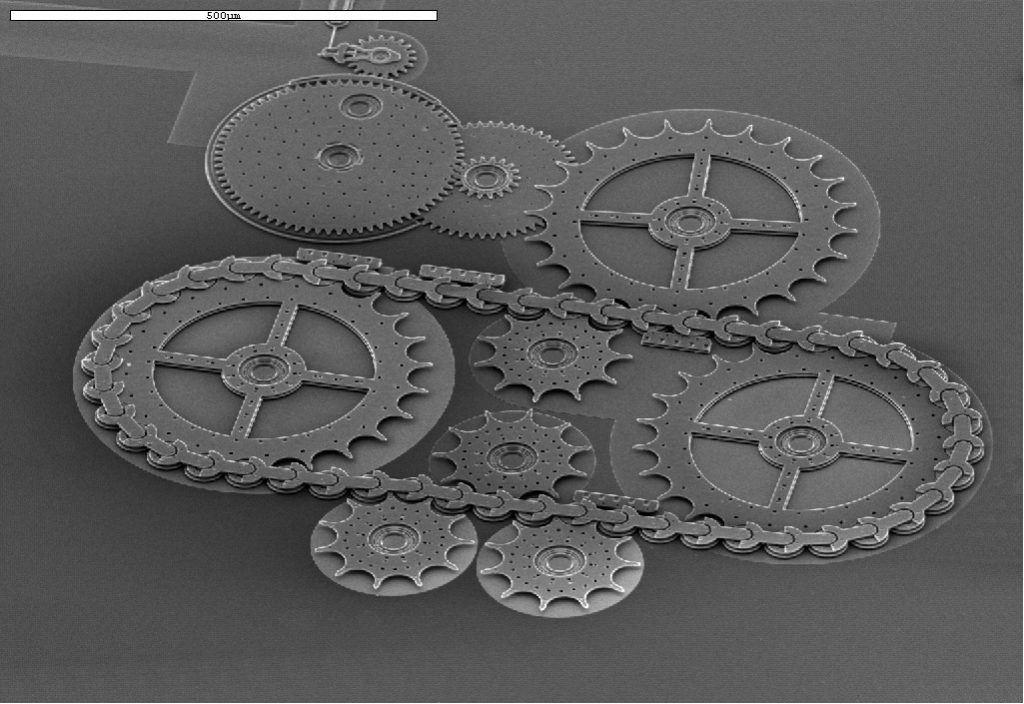 Posted in Just Interesting, Perspective, Science, The Universe and Everything
1 2 Next »