Triumph of the Willful 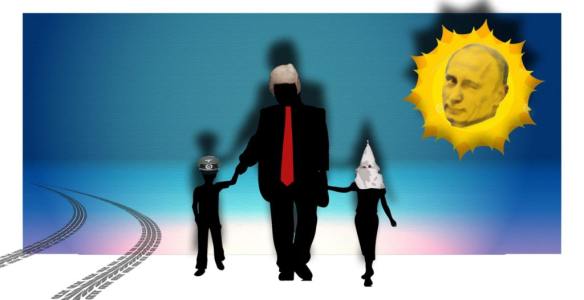 Though he is constantly battling in public over the specific issue of truth, Donald Trump lives a truth-free life.

Truth as something objectively real no longer exists for him except in nightmares. More accurately, truth exists for him as kryptonite exists for Superman: It’s out there and it could kill him. He knows that truth is the natural enemy of the Trump, and swells up in his threat display at the sound of it. Much like empathy and compassion, Trump as an anti-social personality doesn’t care about objective truth at all, and it isn’t real and pressing to him except as an obsessive concern voiced by the unruly ocean of “Not-Trump” surrounding him. The human community relies on truth for health and safety but also for justice and sanity; deprived of the truth, our mental compass needle spins uselessly. In this state, we are helpless toward the con man or the invading army.

The concept of truth can’t be avoided but it can be diverted onto a different track. In Trump’s case, this track is naked self-interest, flitting, pixie-like to whatever make-believe high ground momentarily fits the bill. Trump’s anti-relationship to truth and to the social duty owed to others is a kind of genius of irresponsibility made complete by including himself among the population he lies to. He is like some animal that adapted to an environment and can no longer live outside of it. Lies are his breathable atmosphere, his means of locomotion and his opposable thumbs. He has fully abandoned the premise of truth and never performs that mental pocket check for facts before speaking. Lies are the slime trail-smoothing his passage.

He isn’t so much a man as a conglomerate of whirlygigs slaved to shouting nonsensical PR, excuses, and complaints. Literally, everything is compartmentalized, and every one of those compartments has a self-indulgent narrative. Every part of the man is a fucking Horcrux of his former soul engineered by “killing” something. The thing killed is generally a relationship to someone who isn’t Donald Trump. Long ago, the child that he still is refused the burden of honoring the social contract with some person for the first time. That “murder” was exhilarating and liberating. He became instantly lighter and more powerful when he owed somebody NOTHING. The sticking point was his vestigial conscience and need for external approval. He solved the conscience problem by making his conscience into one more person he owed nothing, especially the truth. He became part of his own audience and the most gullible and superficial of the bunch. No one applauds Donald Trump louder or faster than he does. Henceforth, no action carried a moral burden any longer, only legal ones. He embraced amorality to enjoy immorality. He happily sought opportunities for evil little and big. Often it was for the simple pleasure of torturing small helpless things (people) to hear them squeak for payment, justice or mercy. Violating people’s autonomy, dignity and sovereignty is his signature activity. It’s why he rapes, it’s even why he shakes hands the way he does. It’s as if he’s ticking humanity one by one, off a list of people he defeated. The less any man is, the greater Trump is.

Trump’s admiration for the worst men on earth stems from them outshining him by being more nakedly vicious and selfish than he has managed yet, tethered as he is to crowd approval in the tumbled remains of a democracy. You can practically hear him muttering about how he “never gets to do anything fun” compared to those guys.

With truth no longer HIS problem, he could be absurdly nimble and quick in comparison to the plodding goodie-goodies still huffing and puffing after whether his story was real. As his victims and investigators struggled to pin down the facts behind his stories, he invested only the energy of paying his minions, repeating his innocence and eventually changing the story. Obviously this dynamic is the center of the hurricane today.

When chased into a corner where the truth has a relationship to power and the dispensing of justice, his strategic response is pure intransigence. The clearest report we have on this comes from a little fellow named Donald Trump (quoted here in Bob Woodward’s book, “Fear”)

“You’ve got to deny, deny, deny and push back on these women,” the friend remembers Trump telling him. “If you admit to anything and any culpability, then you’re dead.”

Trump continued challenging his friend for how they handled their own Me Too reckoning, noting their “weakness” and lack of “aggressive” retaliation.

Trump’s “truth” is saying something in a strong way. He who says it the strongest wins. Again he publicly reveals the amorality of his actions in his half stupid, half naive way.

Whenever he defends awful people like Putin, MBL, etc, he says their denials were very strong, that they said it in a strong way. He’s explaining his inner life. He measures everything, especially in regard to his sociopathic boy crushes, in the units of his own personal economy of untruth.

The truth is found at last when every dissenting voice is snuffed out. His odd, clueless public loyalty to this position is why he won’t protect press freedom even to the sorry extent of objecting when Putin, etc. kill reporters. To Trump, they are just honest men doing what they must to get out the true story.

Here is the legal transcript where Trump explains how the weather of his emotions control reality.

“My net worth fluctuates, and it goes up and down with markets and with attitudes and with feelings, even my own feelings, but I try.”

“Let me just understand that a little bit,” my lawyer said. “Let’s talk about net worth for a second. You said that the net worth goes up and down based upon your own feelings?”

“When you publicly state what you’re worth, what do you base that number on?”

“I would say it’s my general attitude at the time that the question may be asked,” Donald responded. “And as I say, it varies.”