To Be and to Have 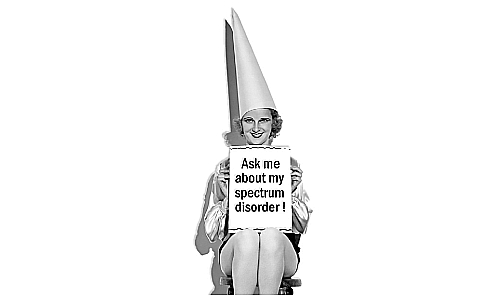 No, it’s not the setup for this year’s wackiest RomCom.

It seems one might possess Parkinson’s like a teacup chihuahua or a classic mustang whereas autism is who you are. You could make the case that autism or schizophrenia dramatically shape your personality in a way that defines you, while the other two do not…but you’d be wrong. The communities of caregivers surrounding them commonly describe what they know as Parkinsonian and epileptic personalities. What decides this automatic and unnoticed distinction between Being a disorder and Having a disorder?

How can you be a diagnosis? The taxonomies of neurological types used to label people aren’t real things that people can “be”. They are checklists where we matched the diagnostic criteria enough to call the result positive. “Enough” might be 4 out 7 matches, for example. Diagnostic criteria are simply a collection of behaviors and bio-metrics accepted by the medical community. It’s rather like asking hunters (the hunting community?) the 7 most distinct characteristics of deer. That might be kind of fun but the heuristic is: “I know one when I see one”.

Different neurologies are utterly real but named neurological types are descriptions, the names for vertices and ranges of behavioral parabolas distinct enough to contrast clearly against normal.

Normal is the smooth melted butter river of behaviors we mostly can’t even notice because of how overwhelmingly common they are. Normal isn’t a thing either, it is a thing that’s going on.  Normal is a strange state, only seen clearly when it is held next to things that are not… a bit like a black light held over a motel bed. Normal isn’t a cool matter-of-fact background to things. Normal is the thing we fear when we make a terrible impression. Normal is the cop we all feel oddly guilty in front of. Normal is being welcomed home or cast out in exile. In meat-and-potatoes reality, there is no break from normality that calls for a celebration.

While Normal continues in exactly this role, all over the world, in the modern era, (and the modern parts of the world) it also developed a “softer side”; a cooler headed, medically focussed, pathology finder. Behaviors once seen as absolute moral failings could be considered as a sickness (a moral failing caused by a broken part). This model, limited as it seems, this was a measure of increasing maturity and compassion. The metered stick that divided good from bad and then enthusiastically bludgeoned the bad was reigned in and restrained a bit. But that tainted, bloody measuring stick is still present at every diagnosis that breaks from neurotypical. It isn’t clutched in the hands of the compassionate front-line professionals, mostly, though sometimes it is. It’s held by a random assortment of the people you’ll interact with in the context of your diagnosis. These are the ones who instantly decide that you ARE a disorder rather than “possessing” one. They are nurses, pharmacists, receptionists, therapists, etc., with their own working model of you as pitiable, childlike, freaky, faking, or just fucked up. Such as the nurse who told me my pills were for (Stage Whisper) “Crazy People” and her doctor who refused to fill my RX while covering for the vacationing prescriber. Every person with ADD has been taken in hand and told to “try harder” or to throw away their pills and get serious. Outside the clinician’s office, on the street, every variance from Normal is a failure to be normal.

This culling of oddballs is a monkey behavior we can’t let go of because monkey behaviors and rules naturally and constantly flow from us to reinforce hive stability.

I did Nazi that coming…

Hans Asperger might almost have been an excited naturalist when he noticed and began to collect odd boys with flat voices and mad obsessions for things like train-watching… in the Germany of 1944. No culture has ever taken the importance of “Normal” so truly to heart and backed it up with deeds, not words. Psychiatry & Psychology under the 3rd Reich eventually served the state’s infernal goals, looking for outliers from normality who needed to be dusted off the Earth to make everything nice and clean. Asperger protected his boys by pointing out their high intelligence. But before you get the wrong idea about him, he also referred children he considered stupid or burdensome to child euthanasia centers knowing their fate full well. These black deeds were unknown till relatively recently when the phrase “Asperger’s syndrome” mostly vanished, to be replaced by Autism, ASD (Autism Spectrum Disorder) and the recently acknowledged but not official high functioning autism. These are people who match the ASD profile with its classic issues and behaviors but have enough “Normal” to get by or even pass.

If we look back down the paths that led us here we can see how a cramped set of “one size fits all” diagnostic criteria raised the idea and issue of autism before the therapeutic world who adopted it and gradually expanded it to fit the range of people they were actually treating. It allowed autistic people a bit of dignity and understanding in a world that manifestly had never offered them either. Though medical science has done us the service of declaring us human there is not much in the treatment toolkit but best practices and pharmaceuticals. We don’t want to be “Normal” but we want relief from the crushing comorbidities that plague us. A treatment plan doesn’t equal successful treatment.

Despite everything, thank god for research, and for provisional diagnostic names and types. I say claim it. Own your label, proudly if you like, because at a minimum we are all working harder than neurotypicals to get through the same day they do. We are playing on hard-mode. Claim the label and the diagnostic checklist while knowing that from the viewpoint of the future, much of that model is WRONG. And therefore ditch the label and list the moment something better comes along. There were people who grieved over losing the name “Asperger’s” because it was the name of the tribe. I get it but the future is calling. Come on.

Humanity is a spectrum condition

Loosely related families of eccentricities, variously gifted and cursed, live on diagnostic islands with “their kind” alone but we are brothers and sisters connected by a unifying “ocean floor” of strongly overlapping gene complexes: Up to 80 percent of people with autism also meet the criteria for attention deficit hyperactivity disorder. Schizophrenia strongly correlates as well in its area of origin. Finally, there must be an endpoint on the autism spectrum after which we find basically normal people. When we run out of syndrome we encounter a “layer” of people who are eccentric in a multitude of ways but whose eccentricity is not maladaptive enough to bother framing it as a disorder. I can imagine the doctor’s notes: “Patient presents as sort of goofy”. Eccentrics are like a jaunty cap on the head of the whole spectrum disordered world.

Many of us mentally go through our lives as if with a busted wing, hopping, not flying, and some of us are lucky to able to do that. Despite this, the exhausting work of trying to keep up and look normal, day after day, is our baseline. Yet if you removed the gifts our tribe has dreamed up and given to society, our world would be drastically and unmistakably impoverished, perhaps even broken.

“What would happen if the autism gene was eliminated from the gene pool? You would have a bunch of people standing around in a cave, chatting and socializing and not getting anything done.”
― Temple Grandin, The Way I See It: A Personal Look at Autism & Asperger’s

In the next revolution that people won’t handle at all well, DNA consumerism will allow for the literal prevention of neurodiversity. What loving mother or father would burden their children with permanent failure to be Normal, given the choice? Thus accomplishing with love what the Nazis couldn’t accomplish with hate, and eliminating from our species much of its restless, uncomfortable creativity. Normal humanity is devoted to ensuring its own survival and replication through compliance with time tested rules. Naturally, it polices itself for non-compliance, like a driver noticing how close she is to the edge of the road and correcting for it. Life is a tightrope rider and Normal is the low center of gravity that allows our neurodiverse crew to lean way over the sides and pick unseen possibilities out of the air and offer them to the world. Clearly, the world would be less interesting and dynamic if it didn’t have us in it.