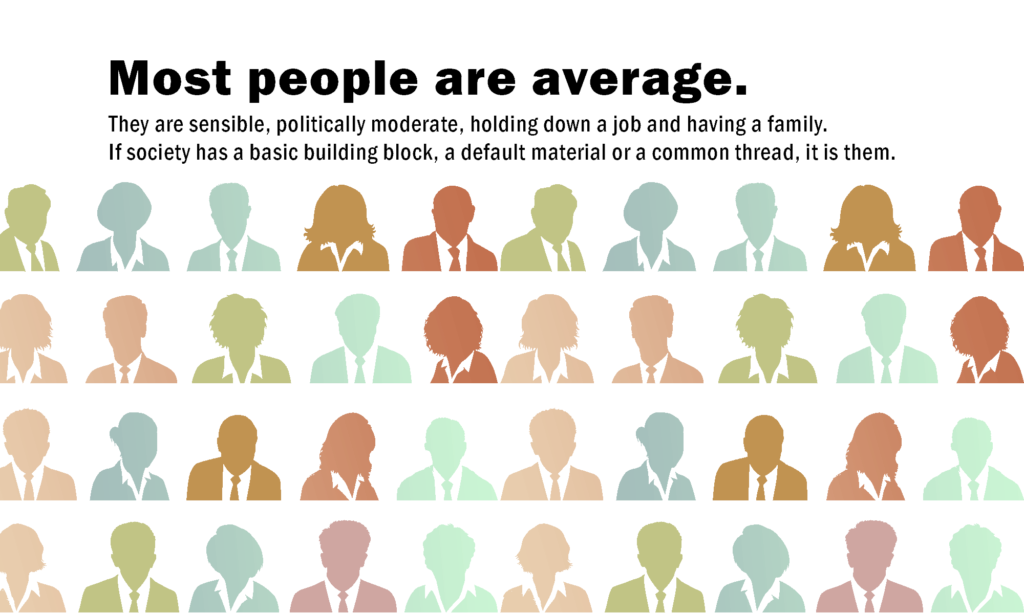 Clinically ASD includes a short list of recognized levels of the disability which exist along a continuum of severity. There’s a break here between the small range of what’s accepted as proven medical science to be autism and the much broader range of people who are legitimately diagnosed as autistic even though they are much higher functioning than the accepted range. It’s tacitly understood by therapists, teachers, parents, etc to be a section of spectrum that could be positioned at the end of the current spectrum and just pick up where it leaves off and run all the way out to those who have a few touches of these traits but are otherwise completely normal. That makes sense as the autism spectrum. I’m grandfathering ADHD in on this spectrum because 80% of high functioning autistics also have ADHD.

Now imagine a made up thing called anti-autism, as the description of a person. I guess they’d be pretty laid back and social, not brainiacs, a bit less sensitive about their…senses. Sound, light, unpleasant textures, crowds, no big deal: Picture a Lynyrd Skynyrd concert or the Okeechobee MudFest…that’s them. Wouldn’t a complete autism spectrum run from extreme to extreme? Therapeutically this is irrelevant but it’s a consistent behavioral spectrum running through every member of the human race. 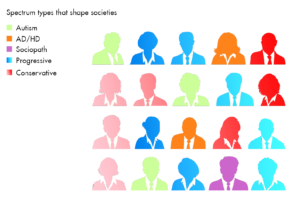 And there are others.

I’m suggesting that psychopaths/sociopaths are on a human width spectrum too. Ranging from absolute cold reptilian self interest to what? An ordinary person who is equally generous and selfish? I think this spectrum ends in saintly, self sacrificing self transcending people. Here is one more range of behavior, mind and heart that runs through everyone. Predictable numbers of sociopaths are also born year after year.

So that’s one disability and one pathology spectrum that, stretched to their opposites, define the range of humanity along that axis.

You might balk at including progressive and conservative as a comparable spectrum but why exactly? It’s a human wide range of belief and behavior that correlates very strongly to particular psychological metrics and predictable amounts of both are born years after year. This continuum and the ground it fights over is what I call Tension Force. Every culture needs and has a domestic version which varies from every other one except in function. Think of it as the surface tension of a culture. What tension force fights over defines the range of beliefs that can be talked about but also the integrity of the cultural colloid. When progressive and conservatives see each other as alien monsters the culture is dangerously near to dissolving.

All three of these spectrums flow at the middle across the wide collection of people are are neither this or that, especially. All have the same graph pattern, skinny at both ends fat in the middle. And finally we notice that middle, our eyes are always drawn to extremes but the predictable baseline range of middle of the road humans is heart of the of the overall pattern. These fancy spectrums define the pointy ends of our possible behavior and the middle defines the soft and round side of that behavior, the normal to which things generally return. The thing to notice is that average people are also born in a predictable percentages year after year. None of these ranges of behavior is a random mutation that coincidentally occurs yearly at the same frequency. The calm chunky middle of is every bit as specifically configured to run a certain way as showy weirdos at the ends of our spectrums. These are all elements and organs that merge and self organize as the Community Organism.