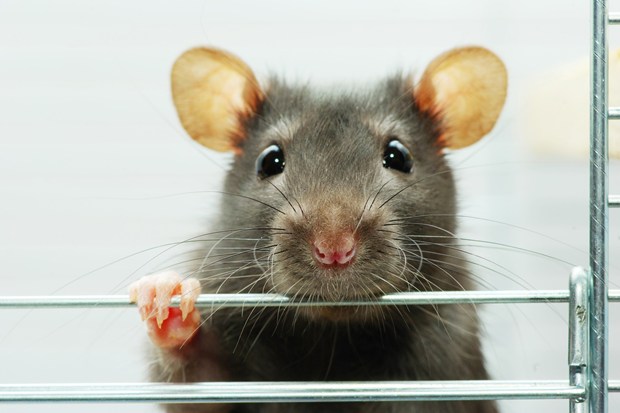 Raise them in a strange high tech “ratatarium” full of rooms and environments where every positive experience is profoundly associated with clear-cut brightly colored shape pulsing on screens all around. Every wall and ceiling is a display screen. Local events of feeding, play, nurture or sex all generate a clear instance of the specific happy sign nearby. Periodically the whole place is electrified or bombarded with terrifying noises and rumbles. The happy lights are always off during these events, replaced by vivid and consistent alternate shapes and colors.

Never mind how it’s possible, I got a grant.

I didn’t mention it, but there are actually 2 of these Ratatariums ©, and each contains a million rats. I have spared no expense. They are exactly alike except that the shapes, colors etc. of the symbols are associated to mean something very different. A warm fuzzy symbol to one group is a cold prickly symbol to the other.  A green pentagon to one group means “playtime ending in sex!” while to the other it means “horrible shaking with bang sounds”.

After a brief delay to write another grant proposal we return to find our 2 million (at least) rats hooked up to little touch screen /console setups complete with comfy little lounge chairs with a place for the tail to go. Each is in its own tiny, tastefully decorated room with subtle mood lighting and no stimulus except the screen and a little carpet that really ties the room together. The brain of every rat has had a tiny device implanted that can wirelessly stroke the pleasure centers. This took a lot of work but it was definitely worth it.

Recall that half of these rats love and fear one set of symbols and the other half loves and fears any entirely different set of symbols. I then created a social media site for them called Ratbook and enrolled all 2 million together, mixing the groups into one. I then added them all to each others friend list.

As each little rat sits there, wondering what the fuck is going on, shapes and colors begin to appear on their screens, persist briefly and then fade. They are randomly pulled from the shared but disagreeing set of symbols.

At this point, it might help us to focus on one rat in particular. Let’s call her Erica because that is her actual name.

When Erica sees the symbol she associates with food appear, she reaches out to touch it. That is the Share Button.

Immediately that symbol appears on the screen of the other 2 million rats.

Half of those rats see the symbol for food and smile fondly. The other half see the symbol for sudden loud owl screech with electric shock and shrink back in their comfy little chairs, horrified at what is shown on screens these days. Some of the “food symbol” group touch the screen. That is the Like button.

Immediately Erica receives stimulation of her pleasure centers, but only a little. Erica is not in ecstasy, she just gets a little “OOOh yay!” feeling, proportional to the number of likes. The rats who saw Erica’s food symbol as sheer terror naturally don’t reach out to touch the symbol. Yick, who would do that? And this counts as a tiny negative, toward remaining on Erica’s friends’ list. If say, 25 or 50 shares from Erica get no response, they are dropped from her friends’ list. But you know, gently.

In short order, as you anticipated, the two million rats have resorted themselves into their original groups, sending each other tiny brain smileys and never seeing anything vulgar and ugly like that blue circle ever again.