The Inescapable Sensation of Free Will

Natural does not equal good. “Natural” includes violence toward outlanders and controlling women’s lives. I suspect “100% Natural” is a phrase Hitler would have liked.

Some questions we ought to ask: 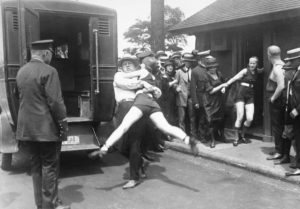 Woman arrested in Chicago in 1922 for too much exposed skin.

All of these behaviors are core hardwired human group traits that support a strong and stable primate hive. These behaviors aren’t beautiful or right philosophically, they are bits of scripting preserved by the natural selection of group behaviors. These are traits that helped us out-compete the good, the bad and possibly the ugly, over the last 200k years.

We are virtually blind to our nature as a species because we are so busy being individuals of our species. We are neurologically immersed in the matrix of these behaviors to the extent that they are not noteworthy. We feel like peripheral players at best to the great events of our time even though these movements are composed entirely of peripheral players. The larger picture is composed of us “pixels” forming the colors, shapes, and gradients, with our massed actions. And just as a cloud doesn’t exist without micro-droplets, human events don’t exist without us in our drifting collective groups. Every notable trend in our world emerges from the scaling up of the actions of individuals who generally feel no personal control over what is happening around them: Most people feel they are just tagging along trying to keep up and figure things out. The mirror of current events is too broad for us to recognize ourselves.  It’s as if the sky was a mirror where we could see our city reflected but not our own little face peering up from it.

The behavior of large human groups is almost opaque to us in the same way that a cell knows nothing about the particular body it devotes every moment to supporting. We plug away at our daily business in much the same fashion. For many decades science fiction writers have explored the issues of robots and their programming and the nature of free will. I think it’s one of those ideas that is compelling because it echoes something deep and unresolved in ourselves, a bit like a profound but confusing dream. In a world where the first semiconscious robot has yet to ask if we want fries with that, the subject is clearly ourselves. Are we…free?

To me, it’s self-evident that every organism works from a script and has a species-specific bandwidth of perception and behavioral flexibility.  One of the complaints people often raise in opposition to a biological or evolutionary root explanation for our behavior is that it’s somehow insulting. There’s a “Are you calling me stupid?” thing going on here. These people feel that they are being taken down a peg in a rude way. It’s a variation on the old: “You saying we came from monkeys?” even though for Christ’s sweet sake, nobody ever said monkeys! It wasn’t monkeys!

So there may be a religious belief feeling insulted here or simply a recognition that people are so different from other animals that it’s stupid not to notice that difference. The difference in free will and intelligence between most animals and ourselves is obvious, and people pointing out our animal nature sometimes seem to be denying that difference or failing to observe it. This comes across as an attempt to lower humans or raise animals in a way that flattens our human struggles to a futile nothing. Our struggles are towering and awful. We work so hard for our victories.  Our own conscious choice and free will appear so obvious to us through our primate eyes that it seems absurd or yes, insulting, to deny it.

However, this sense of having free will appears to be compulsory.  Just as there are clear differences between us and the other animals, there is a clear similarity. The baboon can be tender. Dogs and cats (can) show forbearance to the children of other species. Ducks and dolphins rape. Is a fluke worm morally inferior to Paul Ryan? I think you know the answer to that.

“We may be in the universe as dogs and cats are in our libraries, seeing the books and hearing the conversation, but having no inkling of the meaning of it all.” William James

William James says it better than I have ever managed to. And no animal recognizes the limit of its own consciousness for the simple reason that that means stepping outside of its nature…and looking down on it. The blind spot that can be seen is not the true blind spot. The tools that permit us brief exceptions to this hard limit are psychedelic drugs and meditation. These are the spacesuits we can wear that let us take glimpses of the outside of our box.

We have a difference of degrees from our planetary brethren and not a difference of kind.  There’s something perfect about this paradox being blended into our most basic perceptions. I think we should recognize free will as relativistic. We have more than most organisms, but less than we ourselves are capable of imagining. We have LESS freedom than we can imagine. We have more free will in some situations and contexts than others. Through nature and nurture and even just dumb ass luck we will have more or less free will than the random people we encounter through the day. We are free to do anything inside the smallish box we’ve been assigned.

But all of our free will is framed by our species map, and for now, even the most determined attempt to break through the edges of the map will resolve as an illusion: A mystifying Twilight Zone U-Turn back onto the map. “We can’t drive out of town!” Welcome to the Human Situation, population, everyone.

Our ultimate free will will be something we explore and potentially expand with advancing technology, digital and biological. The challenge will be to explore a territory where we are massively programmed with “species-specific right answers” that are purely mechanistic and to discover some beautiful truths that aren’t just a means to a strong and stable tribe, with all the cruelty and coercion that attend that. Because in fact, our social primate scripting combined with the megadeath technology we’ve developed is now the most dangerous problem we face. The inner forces that drive cultural competition armed with city killer weapons becomes a “rock, paper, scissors” game with literally EVERYTHING at stake.  And as we’ve seen lately, “wiser heads” can easily lose elections to the surging excitement of shockingly selfish and stupid people.

We are in a race to transform ourselves, somehow, into wiser creatures than we even CAN be right now and everything depends on our success or failure. I believe spreading this knowledge, and these sorts of insights about our species scripted behaviors may be an essential element in us outswimming the riptide and the undertow of that behavior in such an unforgiving age.