Epigenetic Influence of Stress and the Social Environment

Grandma’s Experiences Leave a Mark on Your Genes

(As usual, I am publishing a rough draft to force myself to keep writing.) The first two links are scientific papers and the third is a popular article from Discover magazine. They are all quite readable though and worth a look. If you search epigenetics in this blog you’ll find a number of related articles.

Scientists taught white mice to fear the smell of cherry blossoms. (“So Bob, what do you do for a living?” “I frighten mice.”)

The offspring of these frightened mice were never subjected to this cherry blossom trauma but mysteriously, they also feared the smell. More amazing still, the grandchild generation of the original trauma mice, also never subjected to the treatment, reacted with fear. Now further studies are not only confirming these results but showing that deprivation and stress alters inheritance multi-generationally. It affects both physiology and neurology.

The evidence is in. Pain and suffering flows across time. Cruelty keeps jumping forward like a skipped stone. We don’t know authoritatively how many generations forward these effects can travel but 3 and 4 generations are documented using an animal model. And rather than just imagining separate generations of inherited fear, and the many influences on the phenotype of those people, imagine how many poor choices their inheritance initiated. Imagine the effects flowing into the places they live in and their families and friends. Consider the implications for large communities who have suffered trauma almost collectively. In some places and times that could mean whole generations where virtually everyone is bent and twisted by the suffering of their parents and grandparents. How often will behavior born of trauma result in fresh trauma to another?

There is nothing parents love more than their children, and every parent I think has some fears of passing along something bad to their children. Our new knowledge means that anyone suffering a serious trauma, or having survived desperate, stressful times, can be certain that some effects will be passed to their children from the moment of conception.

It makes an act of profound cruelty almost unimaginably important and scales up the guilt accordingly. In the form of random violent crimes for example the effects are stark enough: One innocent victim becomes how many? 3? 6? Don’t forget the 3rd generation…perhaps 18 people? And the 4th generation as well; let’s say 35 people affected by that injury. They don’t even know, they can’t know who they might have been instead, because that crime made them what they are. They might be more fearful, or angry, or just less hopeful than the hypothetical person without the trauma. We don’t know, but it’s safe to say they are bent AWAY from their strength and happiness. 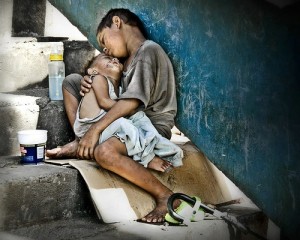 Epigenetics makes a simple, compelling case for the auto-perpetuation of misery and poverty and violence. It makes a case that democracy builds failure into its future by doing too little to alleviate it. A starving, fearful child is a crime against the future and her community and in a sense, the whole world but we are awfully good at feeling peaceful about that crime.

20% of American children grow up in poverty. It’s certain that many of them are second and third generation poverty. Poverty is Hydrochloric acid for optimism and aspiration. How is this not a self perpetuating sinkhole of damaged and downgraded people?

“Those people are just like that.” is the kind of statement you might hear people say related to race or culture or class. The poor have been viewed forever as inherently flawed, undeserving  and unfit. But scientifically it’s probably not so. It’s probably more accurate to say people can be that way when they and their parents have been ground into emotional hamburger and left to pull themselves up by their own bootstraps. There’s a chance that we are living out a dystopian science fiction story where in all cultures, regardless of race, a whole class of people, less happy, strong and confident is being bred through societal neglect. Any limitations to the number of generations the damage is “paid forward” is irrelevant because the suffering of each new generation is likely enough to paint over the hopes of foreseeable future. Big social programs have been deemed failures when they didn’t produce results in “Political time” but perhaps bringing generational trauma to an end is the work of a couple of generations and therefore almost impossible to convince taxpayers to support. And perhaps our famously cheap and nasty social programs wouldn’t soften the blow enough anyway.

Yet the knowledge places responsibility on our shoulders once we know.