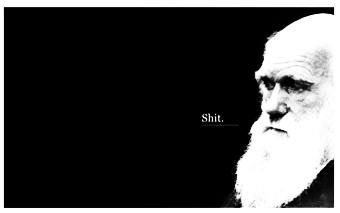 Arguments against Darwin generally come with theology as the endgame. It reminds me of the artificially intelligent toaster on Red Dwarf; it would engage the crew in deep philosophical chats which all came down to asking if they’d like some toast. My argument against Darwin is his insufficiency. Charles Darwin is the Sigmund Freud of evolutionary theory. His role was groundbreaking and important but his theory is primitive and wrong seen from today. My last article described the cronyism that rewarded him with this iconic status. I don’t know that his name would even be included in our current view of evolutionary theory were it not a battlement that must not be surrendered. Neo Darwinism is essentially Fort Darwin in the middle of extreme Born-again territory. This understandably makes us close ranks despite our differences, but when our wagons are in a circle it’s a sure thing they aren’t going anywhere.

Adding to the situation are the whole constellation of behaviors Thomas Kuhn outlined in The Structure of Scientific Revolutions. There is a naturally conservative and reticent approach among scientific professionals. First, there is the paradigm of our moment which is built on all the earlier work in our field. There MUST be a foundation and things that call that foundation into question are not likely to be welcomed with open arms. If something truly and suddenly proved the state of a discipline wrong, at one level it would be a triumph and at another, a tragedy. It would crash and trash much current research and practice. Jobs would be lost and it would be necessary to fall back to the last critical turning point before starting again from more basic principles. Finally, there tends to be a generational transition; the hard heads often have to age out of the system before a new theory is truly accepted.

Fortunately due to the power of the scientific method it’s extremely rare for a large theoretical collapse. However, it IS in the nature of research moving forward that new principles will be uncovered which are so RIGHT that earlier paradigms are wrong in comparison. It can be sudden or through long diligent efforts but all research will look like alchemy from a distant enough point. Still, it seems unfair to earlier scientific explorers who may be wrong by the light of today, but were as right as possible in their own time. A little generosity hurts no one. Lamarck was about the most correct person on earth about his subject at the time of his writing. Darwin and Wallace likewise, let’s grant them all winner status without faulting them for not being perfect and not staying current long after their time.

Some basic problems with Darwinism

Both Wallace and Lamarck believed in some principle that guided evolution generally toward more success on average. Almost as if the infinite monkeys at typewriters had automatic spelling and grammar check turned on. And perhaps an app that edited out utter nonsense. This is closer to what life on earth looks and feels like…but to this day we have no means of identifying and studying such a principle. Therefore it is unscientific not in the sense of being wrong, just by being un-measurable and undetectable. In his time, Dmitri Mendeleev (who imagined the periodic table)  predicted as yet undiscovered elements because within the framework he was using there were gaps in significant places. Logically, he thought,  there should be something in that spot. That’s how I feel about the missing mechanisms in evolutionary theory. I suspect they are there because the current theory is a tiny sheet that does not cover this bed.

The one interesting breakthrough that seems to be in this class of guiding principles is epigenetic or soft inheritance. It’s very new but means of positive feedbacks leading to positive variation are becoming visible in this field and its many developing subdisciplines. We find information across generations, and the experiences of parents affecting the phenome of the children. Wallace and Lamarck are being reconsidered. I think they should be granted full equality with Darwin as founders.

We shouldn’t regularly act from fear of being compromised by theology if we budge from an earlier spot. It’s Theology that never budges with it’s hand full of supposed aces. Science moves, not impulsively but empirically. Our position so long after Darwin, is blessed with a million knowings he didn’t have a available, but relative to the future we are just as wrong and insufficient as he is to us. It can’t be helped. Or perhaps the only help is accepting and remembering it. It won’t help us measure what we can’t detect but it may help us think in less black and white terms and to look for meaningful gaps. The undetectable of today is the foundation of the theory tomorrow.