Begin the War on Stupidity

There really isn’t an original thought here, sometimes I just have to say something when the ordinary world breaks my heart. 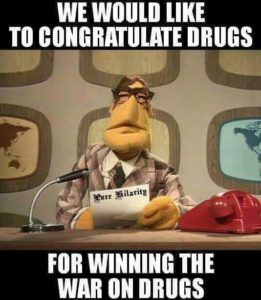 America is experiencing a little glasnost toward marijuana use. It’s like a national version of how good it feels when you stop banging your head on the wall. Except of course for most of America where head banging is still the prefered choice. Let me use marijuana as the example standing in for the overall strategy against drugs.  We know harm reduction is an approach that does less damage to society and costs less money than the “war on drugs” so why don’t we change and reap the benefits?

The answer is stupidity. There is a type of voter who is scared of other nationalities and has an enormous appetite for punishing wrongdoers. This voter is easy to manipulate by any politician who wants to play those cards. Marijuana was criminalized in 1933 by coloring it as a drug of foreign and lower class people. Mexicans and black Americans. It was said that they would become violent and lose control. Yes, it was the “All Mexicans are rapists” of its time.

Once it was illegal, these voters would see any attempt to legalize it as being soft on crime and they would not support that candidate. However, they would support more punishment, so for years and years you could hardly go wrong suggesting longer prison terms. The problem is that this process ratchets only up and never back down. Don’t forget that when it started it was a NON-PROBLEM. It was pandering. How many people were ruining their lives with marijuana in 1933? It’s crazy hard work ruining your life with marijuana, few can accomplish it.

When marijuana was legal and unregulated, did pushers carry guns and have large criminal empires behind them? Of course not. So the laws against marijuana, created to fight a crime problem that did not exist, literally engineered such a problem into reality. It also ruined the lives of people who were convicted and caused more and more money to be directed toward police and prisons. Neither of which would have been needed without the laws against it.

What kind of people would have been able to see that a huge black market would come from illegalizing products people wanted? People who believe in the free market would have seen that coming. You know, conservative Republicans: The biggest believers in the “invisible” hand of the free marketplace. That’s who could have seen it coming. And in thinking about the drug sellers, who could have foreseen that as a business becomes more dangerous, more dangerous men run that business? Anyone, literally anyone who thought about it.

I think the conservative American politicians and voters bear a moral responsibility for the FUBARed nightmare that Mexico has become. It’s like George Bush and Iraq, a blunder that empowers the worst and most violent people and makes the lives of ordinary people a virtual hell.