Is There a Human Population Algorithm?

Every human blends a wide range of psychological variables. Each variable in this list is a spectrum and everyone is somewhere on each spectrum in this list. I don’t think this is some complete list, just some that I was mulling over. And they don’t follow some meaningful rule concerning their position to the left or right. I mean for example that “daring” and “submissive” are not in any sense related because they both appear on the right. There may be some overlap between some of these characteristics that could justify a connection but it’s imperfect and I’m not intending that meaning. I also don’t think that good is on one side and bad on the other. 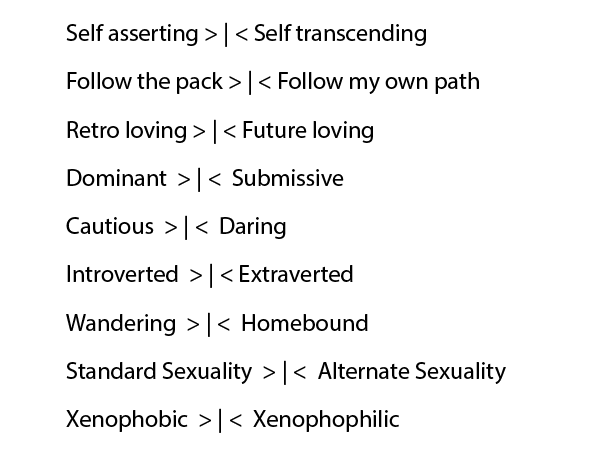 It seems human groups naturally create a spread of these traits because I can’t think of any culture outside of science fiction where there is a real uniformity of these characteristics.
The old sci-fi tradition often portrayed a trait as a species. Remember Star Trek? Vulcans, Klingons and Romulans, Ferengi? Each of these takes all the variables for a self and mashes them through a single psychological template.

Imagine how profound (and awful) the effect would be on a culture if they exclusively doubled down on the most extreme range of the traits above. In theory, you could have an entire population very unbalanced in a certain direction. But it never seems to work out that way, does it? Perhaps the whole thing is absolutely random but there could be within us a sort of community algorithm to keep a healthy range of steady but flexible groups. Some flexibility in the system would allow different tribes to investigate the effects of leaning more this way or more that way as a group. I don’t mean the tribe would look at it that way, just that cultural differences would naturally emphasize different traits and there could be an impact on survival as a result.

There are also structural, age-based ranges for a number of important psychological factors concerning the community’s ability to preserve it’s form but also change if it needs to.

These behaviors are emergent from the developmental moment of each but across a culture the impact is factorial.

I think this is rather like the age-based division of labor in insect hives.  We have a non-random, predictable political range (“tension force” if you read my other stuff on conservative/progressive).  I suspect evolution is a little bottom heavy with more people in the conservative mode but always with enough wild-ass adventurous and rebellious types to keep stirring the pot.

I have a half-assed thought that neuro-atypicals such as Autism spectrum and ADHD people may figure in population dynamics as a necessary element. Autistic people famously helping to advance technology with their obsessive interests and keen observations and ADHD people (I like to think) because their restless love of novelty may contribute in its own way.

I also believe that high functioning psychopaths and narcissists have a place. Their utter lack of concern with others and cold desire to get all the goodies CAN act as an organizing mechanism creating political or religious movements or starting big businesses, etc. Someone sufficiently convinced of their right to rule over others can collect followers like a magnet collects iron filings.

Does it sound like I’m imagining some sort of overseeing entity? Not really. I’m not so much describing what drives this process so much as pointing it out. We don’t understand what drives the balanced population dynamics of hive insects for example. How do they maintain the right population numbers of different castes and such? We know they do, and we don’t know how. If there are principles driving these real-time population adjustments at the hive or even species level, we don’t know what the hell they are or even what mechanism could accomplish it. Science has to patiently build scaffolding closer and closer to any mystery before the answers it finds are truly scientific and not guesses. Along the way, it has to settle all the preliminary questions underlying the big question. We are a long way from solid answers here. Perhaps understandably, most scientists don’t like or respect weird mysteries because there isn’t anything they can say that wouldn’t be wild speculation. They tend to respond neutrally if at all, often suggesting that there’s no evidence for the mystery itself. What is certain though is that human life is coordinated somehow at the community level as well as for the individual. The most practical way I can pursue answers is by looking for patterns of coordination at the obvious level of the world around me. The patterns may start to reveal something of the mechanism as we study them and their relationship to each other.

Posted in Brain\Mind, Human:Nature, Neurodiversity, Society, The Community Organism, The Universe and Everything