Lots of posts on this blog have referenced this concept but not explicitly by name. (for example see Everything is at least 3 things)

Introducing the Holon. This gem was created by the wonderful Arthur Koestler, one of the very under-appreciated thinkers of the 20th century. Once you have this beautiful lens in place so many things snap into delightful clarity.

It begins with this; everything is a two way street. Everything looks downward into its constituent parts, and upward into a larger world it is only a constituent part of. Everything is both part and whole, thus the “holon“. Every level of reality is self contained (and self absorbed). Generally these levels are like parallel lines apparently never meeting. A bit like dimensions in the (possible) multiverse, happening in the same place and the same time but unaware of each other.
Let us start with an ant (again with the ants?). A clearly self contained independent organism, running around busily doing chores. 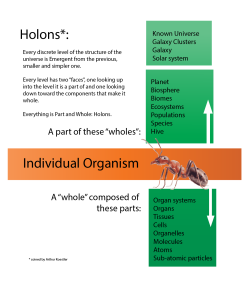 Looking downward, into the constituent parts of the ant we find:
And here we lose the thread as our resolving power fades out. Every level is beautifully composed of the next level down and beautifully composes the next level up. Each is discernibly separate and autonomous in its rules and behavior. Each does the right thing without a trace of awareness of the role it is playing let ALONE the role played by the next level upward in organization. Now let us return to the ant. Actively communicating with its sisters, it gathers information, solves problems, completes tasks and moves on to others. and yet this individual cannot conceive of the organization of the hive that it is effectively like a single cell of. And in the 100 million years that this incredibly successful strategy has been humming along, not a single individual ant ever HAS conceived of the hive it is a member of. Knowledge of its own level is absolutely needed for it to fulfill its function while knowledge of the next level of organization is useless, apparently.
Looking “upward” into higher levels of organization we find: 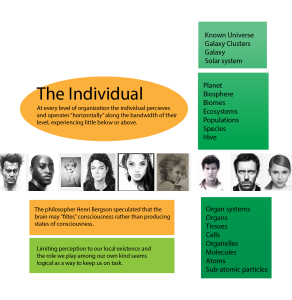 And just to finish
Again we lose resolving power looking outward. Concluding that there is no more going on outside this organizational box of inward down and upward out because we can’t see any farther would be solipsism. Concluding we know “the true meaning” of the systems we are tiny cells or atoms of might be a bit like asking that ant “what it all means”. Given power of speech she might sound like quite a few humans would: “Who knows, I just do what I have to do.”
However I didn’t come this far to say we are merely ants. Some scientific philosophers have only been comfortable with diminishing explanations. That is, with conclusions about our place that somehow seem to reduce us to a comfortably handled size and strip away all that is beautiful and meaningful as if it were irrelevant and a foolish comfort like a teddy bear.
I want to tell you that we are (at one level) VERY like ants and all the other creatures too. I think we need to understand this fully and deeply, the things it drives us to, the ways it guides us, motivates and ultimately limits us. If we are seriously being driven down ant like trails of behavior and turn away from the knowledge because of the shocking horror or the depressing flat seemingness of it than we have given up just at the moment we might begin to make corrections in the system.
We are exceptional in a number of ways that nothing else on earth is…simply because we have done the legwork to uncover these systems and begin to understand them. It might be that earth is only place in the universe where the structure of the universe and the systems within it has been catalogued and examined as it has here. There is no doubt that the elephants and dolphins, dogs and cats (and the bugs and plants) are our blood family and from the point of view of existence, our equals. But they haven’t pried up the cover on the machine and begun sketching the mechanism. And this is where we find ourselves.
No holon truly understands the next level of organization because it plays by utterly different rules and is in fact unpredictable from its constituent parts and possessing a quite different nature. Whatever is true of the human situation I believe that our efforts to be wise and clever, to make beautiful things and communicate are not wasted efforts. Where we are standing, on our level of reality this is the business to be done. Every level of the Holarchy may have its equivalents to wisdom and beauty and if so we should be damn glad when our constituent parts are showing these traits. There may be levels of the universe that are depending on us to come through similarly.