A Young Girl’s Christmas in Finland

My Grandma, Aina Helena Sundberg wrote this quick little reminiscence about Christmas during her childhood in Nykarleby, Finland.
Sleighs and jingle bells and candles in the window! She was born in 1887 and died in 1982 at 95 years old.

“Little Christmas,” the 13th of December, was the day for school children’s festivities in our all-girls school.

Our vacation had started the day before. We were all dressed in our best bib and tucker as we trudged through the snow to our school in the mid-afternoon. It was all dark — there were only four or 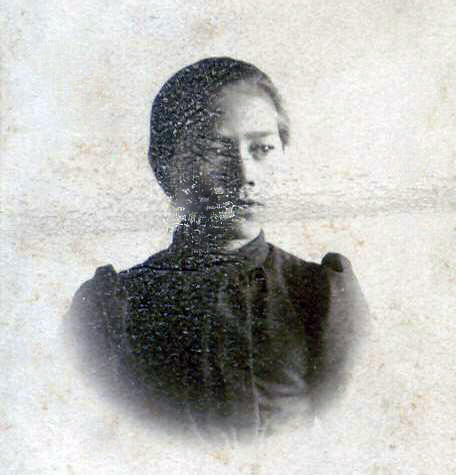 five hours of daylight. Our one-room school was all lit up. There was a big tree to the ceiling, colorful decorations and live candles, ten or twelve inches high burning brightly on the tree, There was an air of expectancy all around. I can still remember feeling the warmth of that room and the crowd.

There were between 30 to 40 of us girls, and anyone who wanted to come was welcome to see us perform — singing, reciting, doing ring dances, imitating “Little mouse, watch out for the trap — little pussy cat tiptoe; little rabbit, sound asleep, better wake and hop before the wolf comes,” etc. We had our fling around and around. Last of all came refreshments of candies, cookies and red rosy apples and Children’s Christmas Magazine, with very colorful pictures and interesting stories, with one for each pupil to take home. By that time we had had our fill and we ventured out into the cold, homeward bound. Our ages were between 8 and 13, We had four classes, and one teacher. We had attended the “Children’s Cradle” school for two years previously. There the first year was kindergarten, and the second year there was reading, writing, and arithmetic.

The 14th of December was the boys‘ school entertainment. They were more favored/in that their school was located on the teachers‘ college territory. There were four buildings in all, so they had individual classrooms. In the last year of the teacher’s’ course of four years, they practiced their teaching ability in the boys classes, observed and judged by the principal and the professors of the seminary, as it was called. All students were males. The boys’ Christmas festivities took place in the big gym and assembly hall I of the seminary. The seating was about the same as at our gala, but everything was on a bigger scale. Some boisterous plays were performed in costumes. Last of all, there was a real, fur-coated Santa Claus who was very generous with gifts for the boys. They all got the same simple useful things. There were goodies for all the children present. You can bet we girls were there too, as were the boys the day before, at the girls‘ celebration.

With ‘Little Christmas” over, then came the long days of waiting for the “real Christmas”. But we didn’t just sit and wait. With so much snow and the slow-flowing river frozen, there was skating, skiing with the skis my father had made, sledding on a green-painted sled with my name painted on in fancy – white letters, and also there was reading to pass the time.

Christmas eve came at last; the tree was trimmed and lit, and we sat in anticipation of the “Star Boys”. This was a group of five of more boys dressed in costume of King Herod and some other characters. Two of them carried swords that they used in a dueling act in their performance. They carried a big star which was homemade with colored paper (transparent) glued on a star-shaped wooden frame. Inside there was a holder for a candle.  There was a tap on the door, one boy steps in — “May the star come in?” There was never a refusal. Their first song: “Good evening both men and women — be of good cheer — the Savior was born,” etc. Then comes the dramatic part where the swords clash and one of the duelers falls down, Shivers go down our spines: There are more songs and then comes Judas — face black, long beard and money bag. One boy asks for a coin for Judas’ bag to save him from being hanged by his beard! Of course we don’t want him hanged, so he gets the coin. Then comes their song of thanks and out they troop to the next house getting to be more and more professional as they carry on.

Our evening meal was lutfisk, rice pudding and turnovers. Then, time for distribution of gifts. The outside door quietly opens, and a package… is flung in – catch the flinger if you can! He’s someone outside the family. – Most of the gifts are sedately under the tree. I used to line the burned-low candles on our window sill and have them lit on Christmas morning when people passed by on their way to church. We had only a ten-minute walk, but most people came from far away. It was an hour-walk for the farthest away. Some might get a lift if there was room in a passer-by’s sleigh. They were pulled by horses and all had jingle bells on them; otherwise they might not have been heard gliding on the snow-covered roads.

The church was lit up by live candles in metal holders in front of the pews and in several hanging chandeliers. The church was heated by two or three pot-bellied stoves, but it was high to the ceiling, and the heat was hardly felt. Regardless of the cold, the mighty organ set the mood and the congregation joined in the familiar hymns. So one got warmer and the children sleepy; the preacher‘s voice was very soothing delivering the Christmas message. It helped to keep our eyes open to study the paintings in the ceiling. There were angels and biblical figures among the clouds. After a 1 & 1/2 hour service, we hurried home to warmth and goodies, checking on presents, and hours of reading.

On their way home from church some regulars always stopped in to warm up with two cups of coffee and cake. You never offered only one, that would have been unthinkable and insulting. (But the size of the cup was smaller than is used here.) Our dinner was roast pork and stuffing and desert. New Year’s Day was much the same, but with church at 10 A.M. The 13th was also a holy day with a church service. Then it was back to school on the l5th of January. 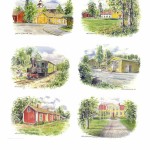 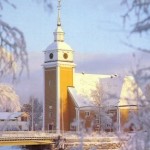 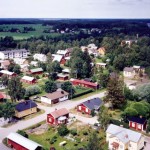 Grandma around the time she left for America