The Angel and Devil of Capitalism 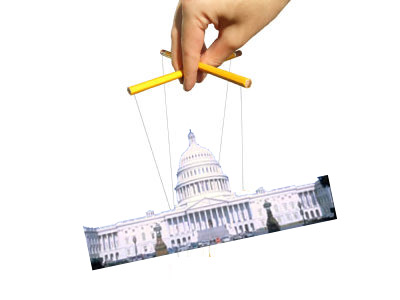 When a business is hungry and growing, it reaches out to people, trying to offer what they want and success reflects how well they’ve done this. This is the free market and it’s lovely! But when that same business reaches a certain level of wealth, it uses it to buy influence in government and artificially create a safer environment for itself with fewer regulations and more challenges for competitors. It has merged ever so slightly with the government and become a little bit removed from its relationship with the consumer. It still honors the general idea of selling a desired product but it is starting to cool to the idea that happy customers are the most important thing. All you have to do repeat a few cycles of this process and the company grows more successful and more remote from any connection to their consumers.
When a company is shielded by government (through influence, not merit or utility) it becomes a kind of “special guest” of the government, not quite private, not quite public: The King’s mistress. Less obvious is that the government changes in precisely the same way. To the extent that this influence is present, the government is no longer entirely public, it is held to some degree in private hands. When this becomes a big effect with many corporations and wildy rich individuals holding this sway we can say the government is parasitized. Speaking and acting only partly on its own. In this way, monopoly capitalism and corporate power is an anti government coup of influence. So now the company is acting against the public on two fronts: By abandoning interest in happy consumers and by hijacking their government. The consumer who motivated and drove the company’s early success has now become its victim. The goal of the company now is to control the market itself colluding as needed to form a sealed system of prices and options. Once the consumer is trapped in this system they become a resource to be milked as much as possible, as frequently possible. Insurance companies have created such a system, and every aspect of medical care in this country is in another overlapping and related system.

The beauty, the rightness of capitalism is the free market and it does exist, primarily for startups and emerging technologies and lower level product design where a breakthrough change makes a big difference. But like a hell positioned above heaven, is the layer of what comes with great success: rejection of the free market, rejection of interest in the customer and corruption of the government. These are the hard wired failures within capitalism. This influence conspires against our well being, it seeks greater control and greater advantage as it further parasitizes the people’s means of governing themselves.

See, if you love freedom, if you hate corruption, you should love regulations on business. You should cherish and protect restrictions on the influence of business (and private individuals). The only way we can preserve the good of our country is by understanding that corruption is a force like gravity that will not miss a weakness or overlook a gap. Remember “the price of liberty is eternal vigilance”? This is that.