Greetings to all and sorry to be out of touch so very long. All our well established patterns were broken up by Isaac’s Mom moving to her friend’s house. So now even simple tasks like taking pictures and getting at the computer are more complicated than they were. Isaac and his Mom are upstairs at P’s house and it’s a sweet little space and a nice home. I come in as usual at 7 in the morning to watch Isaac. We go downstairs to play and run into the problem of P’s sweet very old dog Maggie.

Every morning at 7:26 I step in a puddle of dog pee on a once exquisite Persian carpet. Many days worse things lie in wait. Maggie is sweet natured but half out of her mind. She asks to be let out of the back door to go pee in the yard (well OK, not in so many words) and I let her out and she takes care of business – except that lately she has taken to asking to go outside when she doesn’t need to and then she stands around out there looking sort of confused before barking to be let back in.
Then she forgets that she just asked and asks again – and again – and again – and again – and because I am trying to cut down on profound grossness in the living room I am afraid not to let her out. I spend my mornings being ordered about by a 400 year old dog and a two year old boy.
Maggie’s other quirk is The-Look-Of-Profound-Sadness which she nails me with every time I happen to look her way. When she catches your eye you feel a vertiginous drop toward an infinite horizon of ever deepening despair. It is a look of such woe and sorrow that the complete works of Ingmar Bergman on DVD would help you cheer up afterwards. 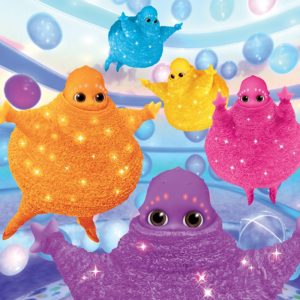 Multicolored alien micropenises? Bedazzled free-swimming clitorii? You be the judge.

We generally head for my house about 8 o’clock for Sesame Street and other vehicles of the gay liberal satanic agenda. One show that Isaac likes that completely baffles me is called “Boobah” a show which makes “Teletubbies” look edgy and concerns itself with six primary colored dancing, flying and apparently farting extraterrestrials who make children dance. When they fly or dance the sound track plays “whoopee cushion” noises so frankly, I don’t know what else to think. Isaac thinks they look like penguins. To my eye they resemble brightly colored penguins as much as they resemble some sort of ambiguous genitalia. They name their characters as they leave their UFO style sleeping quarters to dance and I cover ears and make noise so I won’t learn their names. I know the names of everyone on Sesame street – everyone on Mister Rogers – everyone in Thomas the Tank Engine and even, God help me, everyone on Teletubbies. I will be damned if I will learn the names of the multicolored genital-oid dancing flatulent penguins of Boobah!

Isaac has been great. Very dear and funny and we have to constantly revise our sense of what to expect from him. He is braver physically which is a nice thing to watch happen but he still has this odd way of noticing any mention of things to be cautious of and talking about them a lot. Apparently he heard someone say the phrase “pissed her off’ because he randomly shouts of “Pister Offer” with glee and intensity. We pretend nothing happened. It could have been me, but I don’t remember. He babbles a kind of jibbity jabbitty blibbity blabbity scat jazz jabber which is interesting because he also using really complete articulate sentences much of the time. The scat jabber rhymes and he is really getting into things that rhyme – a friend of XXXXX’s gave him a little toy beaver and he was playing with it – because my head is full of nonsense I said:
“Beaver B. Bumpkin.” Isaac laughed and said “Beaver B. Bumpkin, sitting on a pumpkin. ”

Tonight he said:” Mommy, I have a very good book downstairs which I think you’ll like.”
I’ll send more sooner – love and good thoughts to you all, Hugh