He’s 4 and a half and he’s like an optical illusion that changes with the angle of view. He’s still just such a little boy and yet he’s way way way past toddler. He’s thin with little baby fat in his face. He’s still small and so innocent and crazy scared of little things but he’s determined to be tough and the urge to fight is strong in him.
The other night, playing with cars and tinker toys we built (following his instructions all the way) the… car wash of pain! It had features to spray the cars with cold water, beat them, smush them and chase after them to bring them back when they ran off.

He really has an intense and strong personality and he is far from a pushover. He’s like a cat you love. You say “You’re such a good cat” but you are under no illusion that the cat is “good” (ie: thoughtful, kind or ethical) merely that he’s his own perfect thing and he’s cuddly. What a good Isaac! He tells me he’s bigger and tougher and stronger than me. We rough-house and I toss him around and flip him and spin him, we wrestle and I let him win by dancing on my belly. The poet Robert Haas once wrote of “the poppa body” the Dad who gets climbed on, tread upon, smushed, piled on, etc. It’s delightful to be and I will miss it when It’s not my role anymore.
For some reason, either my influence or just inborn, he has a powerful drive to be funny. About half the time this works and about half the time it’s anywhere from neutral to awful. The best funny stuff he does is out of a clear blue sky.

I brought him in from the car one day and went back to unload some more things. When I came back in he was holding my telephone up to his ear and talking, saying something like:
“This is Isaac, Is everything ready? OK, thanks, goodbye”.

He’s also got a lovely way of seeing connections and a gift for metaphor. We were putting up glowing stars in his bedroom. He put two stars side by side and he said “This is you and me.” he put one a little off to the side and said “this is Mommy” and put two up above and said, “this is Grandma and Grandpa” he put a few more stars up here and there with names for the people and pets they represented and stood back to look at it and said. “I’m making a star map of my people.”
He also made up a good rhyme about the holidays, it came out so perfectly that I can’t believe it’s really an accidental rhyme.
Isaac Compares the Holidays:

As long as he’s been able to really follow stories I’ve been making them up for him and lately our storytelling is team-based which involves a certain amount of sacrifice of quality control on my part but some of his story ideas are great. Sometimes we cooperate on bedtime stories, both of us wandering forward through unknown territory nudging the other in the direction we want to go. The problem is that when you are a parent you tell the story like an airplane trip. That is, it gets itself organized, lifts off, has some excitement, and comes in for a landing. When Isaac sees a shared story coming in for a landing he grabs the controls and sends it off on another trajectory. “Suddenly they saw a light under another door!” Until at last the Dad packs his parachute and bails out somewhere over Omaha. 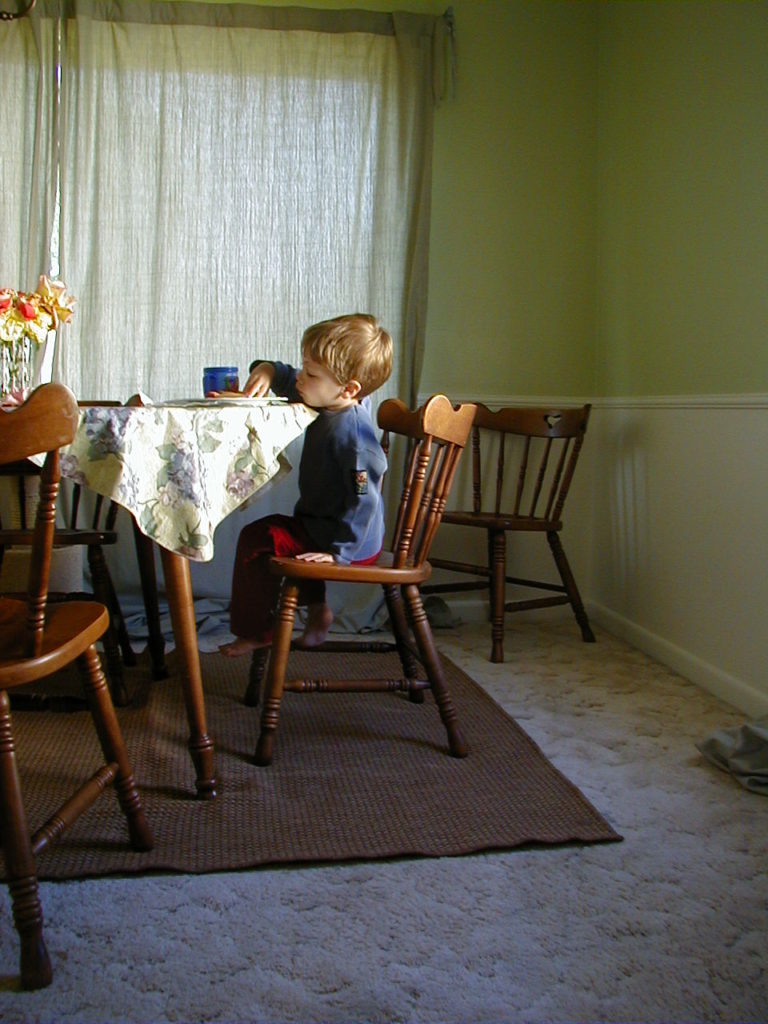