Cows are not scary but they say “Boo” What does the cow say? Boo.

We played hide and seek yesterday and when he popped out from under the blanket he would say “Bo” I finally figured out this must be “Boo” learned at daycare as kids did halloween things. I like to picture him hearing this and thinking “Well that’s just silly. They must be saying Bo.”

He got another of those goddamn hard plastic toys that look like a cartoon animal and go off like a car alarm playing the same damn six little kid songs if you bump them.

This one was disturbing to him. It’s supposed to be a caterpillar with a long undulating green body but it also has little wobbly wheels and antennae on it’s head and all down it’s body in the form of bright balls on flexible springs. He looked at it and was fascinated and then obviously disturbed. The unmistakable look on his face was: “What the hell IS that?” For a couple of hours there was a degree of toy tension not seen since the “Big Red Ball of Death” episode.
He pointed at it every couple of minutes and said “Dat?”
“It’s supposed to be a caterpillar ”
“Dat?”
“A caterpillar – a kind of bug”
“Dat?”
I found a picture of a green caterpillar and showed him and pointed at the toy.
“It’s a caterpillar, a kind of bug.”
a few minutes later he looked at it and in a relaxed way said “Bug.” like you might say “Well alright then.” 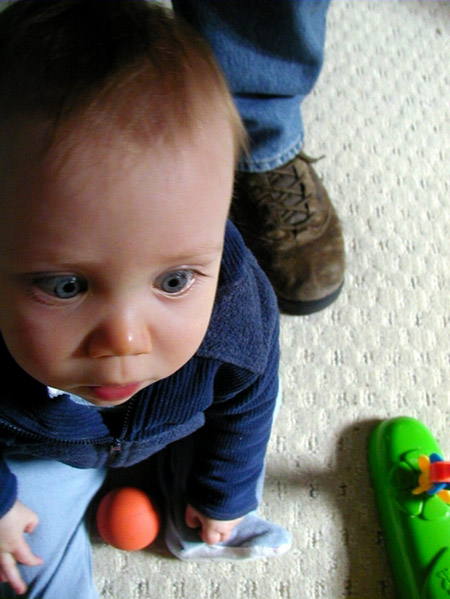